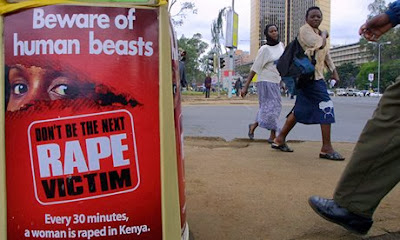 News reaching us is that over a million furious campaigners have signed a petition demanding justice after three men accused of brutally gang-raping a Kenyan school girl were ordered to cut grass as punishment.

The ferocious attack on the girl and lack of action towards those who carried it out has sparked outrage in the country. The girl is now wheelchair-bound with a broken back, caused either by the beating or by being hurled down into the pit, and also suffered serious internal injuries from the rape.

The 16-year-old girl was reportedly attacked, beaten and then raped by six men as she returned from her grandfather’s funeral in western Kenya in June, before the gang dumped her, bleeding and unconscious, in a deep sewage ditch.

On Monday, the number of those who signed an online petitions started by a Kenyan woman, Nebila Abdulmelik, and publicised by the campaign group Avaaz topped a million, and was continuing to grow.

“Letting rapists walk free after making them cut grass has to be the world’s worst punishment for rape,” Abdulmelik said. “It’s an absolute failure of the entire system and an absolutely shameful response by Kenya’s police.”

The victim knew some of the attackers, and three of them were taken by villagers to the local police station, the girl’s mother earlier told Kenyan media.

“The three were only ordered to cut grass around the police camp and set free shortly after,” the girl’s mother told the paper.

“My wish is to see justice done,” the girl told The Nation newspaper, which first reported the story, and has led a campaign including raising funds to cover medical costs. “I want my attackers arrested and punished.”

Lawmakers have condemned the attack and subsequent police failures, ordering action to be taken.