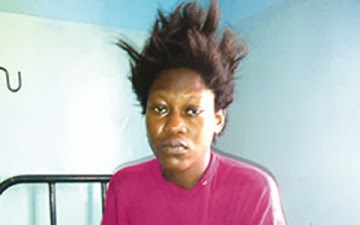 We reported some days back that President Jonathan ordered for the investigation of the case of a Lebanese boss, who abused his Nigerian employee (read HERE). This is an update of the situation.
The Lagos State Police Command on Friday arrested Kaveh Noine, a manager with Yoppan Printing Company, for allegedly kicking his pregnant subordinate, Alexandra Ossai, in the stomach. The incident which occurred 2 weeks ago was said to have caused the loss of the victim’s pregnancy.
It was reported that Noine — a Lebanese — reportedly travelled out of the country when policemen attached to the Area F Police Division, initially went to the company to invite him for questioning on Tuesday.

Following the publication, President Goodluck Jonathan, had on Friday directed that the police and the National Human Rights Commission investigate the matter, expressing his displeasure over the incident.
However, it was gathered that Noine was arrested on Friday by the Lagos State Police Command in Kano where he had fled to on Friday and brought him back to Lagos.
The Lagos State Police Public Relations Officer, Ngozi Braide, confirmed the story. She said, “Even before President Goodluck Jonathan ordered an investigation into the case, the Lagos State Police Command has been on it.
“In the course of our investigation, we discovered that Noine was still in the country; he had fled to Kano. Our men traced him to Kano, arrested him and have brought him back to Lagos.
“Presently, he is making his statement now at the command. The issue of bail, has not come up for now.”
Ossai had, alleged that Noine assaulted her several times during her eight months stay at the company. Noine had allegedly hit Ossai in the chest a day before kicking her in her stomach over some misdemeanor by those whom Ossai supervised.
She also alleged that Noine was in the habit of physically assaulting workers at the company with anything he could lay his hands on, whenever he was angry.
The 34-year-old mother of one was said to have developed pains in her stomach which lasted for two days before subsiding. The pains were said to have begun again in the early hours of December 16, 2013, resulting into an emergency surgery at a private hospital at Fagba.
Her seven-month pregnancy was allegedly lost to the kick, as a result of a broken placenta. Ossai’s appointment with the company was allegedly terminated as a result of the incident and two of her siblings who also worked there were sacked.
Already, the Lagos State Public Advice Centre has waded into the case and offered Ossai free legal aid. The Public Relations Officer of the centre, Mr. Alex Omorodion, said, “We are going to liaise with other security agencies in Lagos State to see this matter to a logical conclusion. We also intend to visit the factory and talk with other workers to determine if more people have been abused by Noine. Then we will prosecute Noine at the conclusion of our investigation.”
When reporters contacted Ossai, she said, “I am really happy about the arrest. The rest is left to the police and my lawyer.”