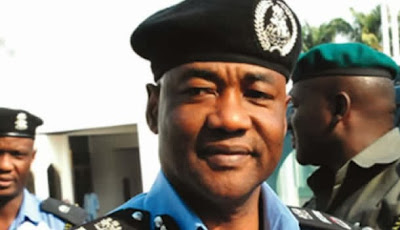 The Lagos State Police Command said it has arrested a 37-year-old man for abducting and raping a 30-year-old woman for three years.

The suspect, Idowu Ajibola was paraded alongside three other suspects who specialise in kidnapping little boys in Lagos and Ogun states.

Idowu who was arrested by police attached to the Area ‘E’ Command in Festac town, was said to have abducted Modupe Brown under mysterious circumstance.

It was gathered that Brown was a 400 Level student of Business Administration at the Lagos State University, LASU, when she was abducted and kept incommunicado with her family for three years.

It was further gathered that on September 9, 2013, police operatives, stormed Shagamu, Ogun State and rescued the victim from the hideout and consequently arrested one Ebun Idowu, the abductor’s mother, while the abductor was arrested at Idumota area of Lagos.

The Deputy Police Public Relations Officer,DPPRO, for Lagos State, Damasus Ozuani, who paraded the suspects said, “ The suspect moved the victim round three different locations during her incarceration. She was kept at Oshogbo, Osun State, for six months, at Bariga, Lagos, for another six months, and at Shagamu, Ogun State for two years.

“The suspect, who hails from Abeokuta, Ogun State, is a primary school drop-out. He forcefully impregnated the victim while in captivity and who later delivered a physically challenged baby girl as a result of refusal to have the baby immunised against polio”.

In an interview with Ajibola, he described Brown as his lover and said they have been cohabiting for three years.

He said: “She told me that she wanted to elope with me because her parents did not want her to marry to a man of her choice. I told her that I have no money but she said I should not worry as she will get a way round the problem.

“Some days later, she paid N 200, 000, into my account and we travelled to Osun. Due to the nature of my job, we moved from place to place. I was surprised the police came and arrested me.”

Refuting Ajiobla’s claim, Brown insisted she was hypnotised and abducted by Ajibola in 2010, claiming she never me Brown until her abduction.

She further said that Ajibola accosted her on the day when she was going to pay her school fees.

According to her: “I lost consciousness the moment he touched me and he asked me to go back to my house and bring all my belongings and that was how we started living as husband and wife.

“Any time I attempted to go home, a strange voice will tell me not to go and in the process he impregnated me. We moved from place to place and he prevented me from immunising my baby. I recently regained consciousness and phoned my mother, who then called the police.

In a related development, the police paraded three suspected kidnappers who are currently detained at the Special Anti-Robbery Squad, SARS.

Ozoani, who identified the suspects as Olalekan Benjamin, Gbenga Sholaja and Samson Somorin, said they were arrested when the Divisional Police Officer at Igando, Ben Osuji, received an intelligence report on the gang’s activities at No. 12 Olowojeunjeje Street, Egan, Igando, Lagos.

According to him, “The DPO at Igando apprehended Benjamin and later transferred him to SARS, for further investigation.

“During interrogation, the suspect confessed and mentioned some of his gang members as Sholaja and Shomorin, who are based at Alagbado, Lagos and Owode- Ijako, Ogun State, respectively.

“The officer in Charge-of- SARS, Abba Kyari, Swung into action and arrested the two suspects from their various hideouts. They confessed to have kidnapped three children, one from Omole Phase 1, another from Alagbado area, while the third was from, Owode-Ijako, Ogun State and they collected various sums of money as ransom from their parents.