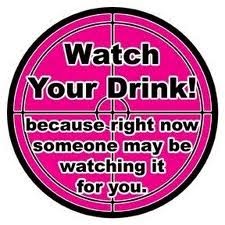 Simply put, one of the worst things that can happen to a lady is RAPE. Yes, this is not gainsaying or any such thing. Just ask any victim and they’ll tell you how harrowing the experience was (for some, it never goes away).

While evil men, and sometimes women, device schemes to unnecessarily ruin people’s lives. We have to help the cause by enlightening our women folk on the concept of rape, and measures to be taken to avoid being a victim.

Rape is defined by the Oxford dictionary as “The crime, typically committed by a man, of forcing another person to have sexual intercourse with the offender against their will.”
Rape comes in different forms, examples of which are Date rape, Spousal rape, Child rape, Statutory rape, Prison rape, War rape, Corrective rape, Incestual rape…

This article is focusing on Date rape.

Date rape refers to rape committed mostly by friends and acquaintances, and sometimes by total strangers. Date Rape occurs when there is forced or coerced sex within a dating relationship. While Aquaintance Rape the act is committed by someone known to the victim. Nearly 2/3 of all victims between the ages of 18 and 29 report that they had a prior relationship with their attacker.
So take note that the fact that he is your friend, or even your ‘bestie’ does not make you 100% safe with him. Always be on your guard.
Most cases of date rape are drug-facilitated, that is, they happen with the aid of Date Rape Drugs.

The drugs can be any substances that affect the Central Nervous System(CNS) This includes street drugs (e.g. cocaine, marijuana, ecstasy, GHB), prescription drugs (e.g. anti-depressants, tranquilizers), and over-the-counter medications (e.g. cough syrup). When these drugs are mixed with alcohol, their effects are enhanced, which makes people particularly vulnerable.

The most common drug used in sexual assault is alcohol. It is estimated that about half of all sexual assault victims were under the influence of alcohol at the time of the assault. While Rohypnol is most infamous for this crime, studies have shown that it is used less than 1% in Date rape crimes. Perhaps its infamy stems from the fact that it is highly potent and can cause amnesia while its effect is ongoing. Victims of Date rape have been known to have consumed drugs such as marijuana, cocaine, anti-depressants, codeine e.t.c.

In a recent study of sexual assault victims who believed they were intentionally drugged in Ontario, Canada, most victims reported that they were socializing in a public place prior to the sexual assault. Over half of victims said they were last at a club, bar, lounge, restaurant, house party or social event.

Half of drug-facilitated sexual assault victims are assaulted by a friend or acquaintance; however, this may be an under-representation because many victims are unsure about who assaulted them.

Drug-facilitated rape is not predictable. However, there are a few safety tips that have been widely distributed to help potential victims keep themselves and their friends safe.

Protecting Yourself: The best defense against date rape is to try to prevent it whenever possible. Here are some things both girls and guys can do:

1. Examine your feelings about sex: Decide early if you want to have sex. In the “heat of the moment” is not a good time to start thinking about it and it gives the other person too much power. The sooner you communicate firmly and clearly your feelings about sex, the better your partner will accept your decision.

3. Be alert to unconscious messages you may be giving: Your partner may interpret your behaviour differently than what you intended. 90% of communication is non-verbal and often we send strong non-verbal cues of willingness to enter into a sexual relationship. Beware of the signals you send with your posture, tone of voice, clothing, gestures, and eye contact.

4. Be forceful and firm: Do not worry about being polite if you are in an uncomfortable situation. Politeness or passivity can be misinterpreted as permission. Use phrases such as: “Stop it! I’m not enjoying this” or “If you don’t respect my wishes, I am leaving.”

5. Stay sober and aware: If you’re with someone you don’t know very well, be aware of what’s going on around you and try to stay in control. Do NOT take intoxicating substances in the guise of “it will relax and help me to relate better.”

6. Don’t go alone: Go out with a group of friends and watch out for each other.

7. Take self-defense courses: These can build confidence and teach valuable physical techniques a person can use to get away from an attacker. FYI, Stand To End Rape Initiative will be making this available. Kindly check our twitter handle (@StandtoEndRape) for our updates.

We hope some of you have learned one or two things from this. If you have articles you want to share with us, please send them to Standtoendrape@gmail.com. Let someone gain from your knowledge.
Thanks for reading!
0 Likes