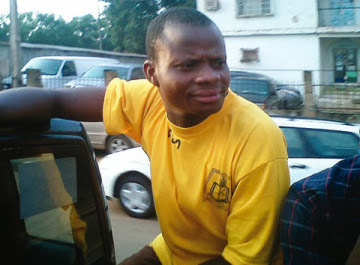 Report from the Punch states that the police in Ogun State on Tuesday arrested an officer of the Ogun State Vigilance Service, Liasu Oyedele, over the alleged rape of a female National Diploma 1 Banking and Finance student of the Moshood Abiola Polytechnic, Abeokuta.

The 30-year-old VSO officer is currently detained at the Ibara Police Divisional headquarters.

The suspect, according to some MAPOLY students, who staged a peaceful protest to the office of the Commissioner for Women Affairs and Social Development, Mrs. Elizabeth Sonubi, was caught after he had already had carnal knowledge of the victim, who was said to be in her menstrual period.

The suspect was said to have accosted the student, who had gone for ‘Group Reading’ in preparation for the institution’s second semester examinations at Alewenu Village, Onikolobo, Abeokuta, around 10pm on Monday.

The placard-bearing protesters alleged that despite the fact that the victim was menstruating at the time, Oyedele allegedly raped her for close to two hours.

The victim, reportedly exhausted as a result of the rape, was said to have been rescued from the grip of the suspect by passers-by, who rushed her to an undisclosed hospital for treatment.

However, none of the officials of the state government was available to address the protesting students.

Addressing the MAPOLY students, the State Coordinator of the Child Protection Network, Peju Osoba, condemned the incident, describing the act as a crime against the state.

“It is a crime against the state and the Child Protection Network will ensure that justice is done,” Osoba said.

She added that she had contacted the Ogun State Police Command to ensure a transfer of the case from Ibara Police Station to the Command Headquarters at Eleweran.

Osoba pledged that the state government would be formally informed of the incident while legal action would be taken by the CPN on the matter.

The acting Police Public Relations Officer, Abimbola Oyeyemi, confirmed the incident and the arrest of the VSO officer.

Oyeyemi, an Assistant Superintendent of Police said, “His case will be transferred to Eleweran for further investigation.”