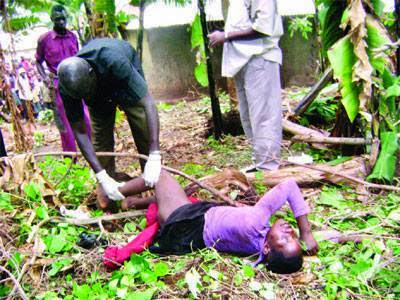 She was just a young innocent girl, she was 18. Her fault some people say is her decision to obey her parents by getting ordinary garri (food) for the whole family in the night. SHE WAS A GIRL.

Eight men gang raped her one by one and then strangled her neck, and also used hammer and nail to pierce her vagina. They left her to die in by a bush path, spreading her legs wide! Wounded! Exposed! Her body was discovered in the early hours of the morning after a thorough search was conducted through out the night. What’s more is that when she was discovered, it was a horrible site, as no one could look at the nails in her body.
She was confirmed dead already and no one at the crime scene could hold back tears. Not to worry, she wasn’t your sister nor your daughter,  but she could have been. The brutality has to stop right here guys. Rapists deserve capital punishment for their cruel, they just succeed in wasting another girl’s life through perverted acts. She died on Friday, 5th October 2013.
Rest in Peace♥ and we pray that her killers get the WORST punishment possible. This doesn’t only happen in Anambra State, but in most states and countries around the world. Is this how we treat our women? It’s saddening to live in a world where the vulnerable ones are easily exploited. If her death hurts you, join the movement to Stand to #EndRape.
Culled from: Facebook
0 Likes