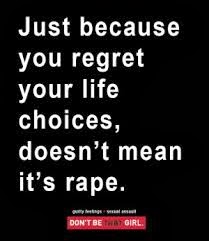 Sometimes even the most well-meaning people can say the wrong thing to a victim of rape or sexual assault. It’s very hard to know what to say and what not to say.

Here are some tips for what not to do or say to a sexual assault survivor:

–– Don’t guilt or pressure your friend into reporting the rape – it is up to his or her discretion whether or not he or she wants to report the rape to the police. You can encourage this, but do not use guilt or pressure as a motivator – your friend is already dealing with a lot of guilt and grief about the rape.
–– Don’t imply or outwardly criticize the survivor for not resisting the attack. A rape is not the victim’s fault no matter what.

–– Don’t suggest that the rape or sexual assault was somehow related to being in the wrong place – and that the victim should’ve known better.

–– Don’t ask after what the rape or sexual assault victim was wearing or doing at the time of the attack – it implies that blame should be given to the victim for behaving inappropriately.

–– Don’t judge. Anyone can be a victim of rape or sexual assault – not simply “drunk chicks.” Assaults can happen to anyone at any time at any age. So check judgement at the door and listen openly as your friend opens up about the assault.

–– If your friend indicates that he or she does not want to talk about the rape, do not push for details. It may make them feel more uncomfortable than they already do, having survived a rape.

–– Don’t imply that he or she is misremembering the situation. If your friend was the victim of sexual violence, it’s not up for debate.

–– If the rape victim is male, do not indicate that male rape is fake or that the assault didn’t happen. Men can be raped, too.

–– Don’t frighten them – even as a joke. If your friend or loved one has experienced a sexual assault, chances are that they will feel jumpy and startled under the best of circumstances. So don’t come up behind them suddenly or touch them – this may trigger flashbacks of the rape.

–– Don’t be offended if your loved one doesn’t want to be close or touch you. Touches may trigger flashbacks of the rape. Ask before hugging or holding their hand if they are okay with you hugging them. Ask every single time you feel compelled to hug them – don’t assume that they are always going to feel comfortable with your touch.

–– Don’t take out your feelings on your loved one. Knowing that you weren’t able to protect someone you love from a violent sexual assault can cause a lot of unpleasant feelings inside you – it is not your friend’s responsibility to hear about or comfort you about how the rape makes you feel.

–– Don’t expect too much of yourself. Your friend or loved one may need different types of support from different people – you should not and cannot be the sole person to support your friend as he or she recovers from a rape.

–– Don’t speak for your loved one unless they have asked you to. When friends, doctors or police ask questions, allow them to speak for themselves.