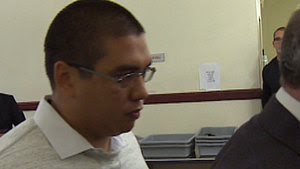 A Saint Mary’s University student, who also coaches girls soccer, has been suspended from school after admitting to sexually assaulting a girl who was 14 years old when the assault occurred last fall.

Konstanty ‘Kostek’ Bedoa-Gorski, 24, entered a guilty plea during a court appearance Tuesday. Bedoa-Gorski was the girl’s soccer coach at the time. His duties as a soccer coach are unrelated to Saint Mary’s University.

The judge had granted Bedoa-Gorski’s request to be released from custody and delayed his sentencing until December in order to have time to finish his semester at Saint Mary’s University. But Steve Proctor, communications manager for SMU, said Tuesday evening that Bedoa-Gorski has been suspended.

“A disciplinary hearing that will be held as soon as possible,” said Proctor in a news release.

“It was really hard watching him walk out of the courtroom,” said the victim’s mother, who cannot be identified under a publication ban. “We want this done as soon as possible for our daughter.”

“There was no closure today, really,” said the victim’s father. “We have a strong daughter, and hopefully whatever he did to her is temporary and we are dealing with it.”

Bedoa-Gorski offered no comment as he left the courtroom.
Controversial chant

The guilty plea comes just one week after Bedoa-Gorski’s school was criticized for a controversial frosh week chant which promoted non-consensual sex with underage girls.

“What happened at Saint Mary’s last week and what happened with my daughter are completely separate stories with commonalities,” said the girl’s mother, who called the chant abhorrent.

“When you see kids — male and female — standing up at Saint Mary’s and saying that chant, what is that saying? That is showing that there is a tolerance, that it’s funny, that it’s OK. I would like these kids to take two seconds to look at what’s happening to my daughter or other kids that don’t have the control.”

She says her daughter was the victim of gossip and bullying after the assault. Both parents said people aren’t doing enough to support victims.

“She was in junior high and he was a university student,” said her father.

“She’s the one who was bullied, mercilessly. And there were many of them that did nothing but gossip, bully and make her life really awful,” said her mother.

“It appeared that he was predatory. If it didn’t happen to our daughter, it might have happened to someone else’s daughter. It happened over a very short period of time, he was very opportunistic.”

The victim’s parents say they are devastated and urge other parents to trust their gut.

“To all parents out there, be wary, ask questions, trust your gut,” said mother.

RAPE SURVIVOR STIGMATIZATION; AN ADDED INSULT TO A BLEEDING INJURY