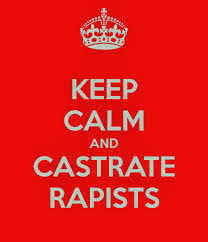 This topic is controversial but sounds really interesting and fascinates me a lot! How about castration being a punishment for rapists. Wouldn’t it just make the world a better place? Lol!

Rape, a form of sexual violence, is a word no sane woman wants to hear let alone experience. Even as a man, I loath rapists with a passion which degree I can’t find enough words to describe.

There was a girl who needed much convincing to drop her plans to commit suicide following a gang-rape by 3 men led by someone she considered a “big brother.” Her pains I just couldn’t imagine when she expressed her agonies and the deep seated anger against the perpetrators of the dastardly act.

Her pains she said, was multiplied because she could not muster courage to report the issue to the police as she was sure the tide would be turned against her when the issue would get into full swing.

As good as taking legal action against the perpetrators sounded, she refused to bulge as she stood her ground that she’ll rather bear the pain in silence if she can, or take her life and end it all, an option she seriously considered as the “option A” before God touched her to choose life ahead of death.

I have much interest in news and incidences that have to do with sexual violence against women, adding my voice as audibly as possible in condemning rape and such like acts against the women folk.

Anytime I had the opportunity of talking about the ills of sexual violence against women, I erroneously expressed hopes that the government can take up the gauntlet and make the Nigerian society safe for the women like the American society. Researching into sexual violence against women in the U.S.,  a detailed report exposed the hypocrisy of the American society as per the protection of women against ills.

A report tagged the National Women’s Study conducted in the US (sourced via internet) produced dramatic confirmation of the mental health impact of rape. The study determined comparative rates of several mental health problems among rape victims and non-victims.

The study ascertained whether rape victims were more likely than non-victims to experience these devastating mental health problems of Posttraumatic Stress Disorder and came up with worrisome disturbing revelations.

Chiefly among the discovery of the study were that; “Almost one-third (31%) of all rape victims developed PTSD sometime during their lifetime; and more than one in ten rape victims (11%) still has PTSD today.

“If 11% of all rape victims have PTSD, then an estimated 1.3 million American women have RR-PTSD.

“Some mental heath problems are life threatening. When asked if they ever thought seriously about committing suicide:

“Rape victims were 4.1 times more likely than non-crime victims to have contemplated suicide.

“Rape victims were 13 times more likely than non-crime victims to have attempted suicide (13% Vs 1%).

“There was substantial evidence that rape victims had higher rates than non-victims of drug and alcohol consumption and a greater likelihood of having drug and alcohol-related problems, compared to women who had never been crime victims.”

Senator Abike Dabiri-Erewa once presented a report, which sought life imprisonment for anyone convicted of rape. The suggestion was adopted by the parliament and its awaiting concurrence from the Senate.

The Bill in question also sought to ensure that persons convicted of gang raping a victim shall be liable jointly and severally to a minimum of 20 years imprisonment without an option if fine.

The lawmakers in considering the Bill are also recommending imprisonment not exceeding five years or a fine of N100, 000 or both for anyone convicted of willfully causing or inflicting physical injury on another person by means of any warp on, substance or object.

Any person who incites, aids, abets, or counsels another person to commit the act of violence and is guilty of the offense is also liable on conviction to imprisonment for a term not exceeding three years or to a fine not exceeding N200,000 or to both fine and imprisonment.

It was also recommended that any person who compels another by force or threat to engage in any conduct or act of sexual or otherwise to the detriment of the victom’s physical or psychological well being commits an offense and is liable on conviction to imprisonment for a term not exceeding two years or a fine not exceeding N500, 000 or both.

Female circumcision and general mutilation also drew punishments as any person convicted of performing it or engaging someone to carry it out risks four year jail term or a fine not more than N200,000 or both.

Aiding female circumcision attracts N100,000 or two year jail term or both while any person convicted of frustrating investigation and prosecution of offenders is guilty of felony and liable on conviction to imprisonment not more than three years or a fine not exceeding N500,000.

However, the recommendation that the victim has the right to terminate pregnancy resulting from rape and proved harmful to the health of the victim was rejected by the lawmakers and deleted from the report.

What’s your thought?
Edited and culled from: Daily Independent.
0 Likes