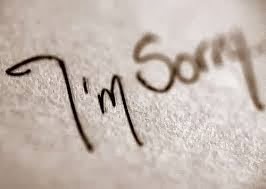 I’ve always wanted to write on this topic but was in need of a real case point for back up, anyway last weekend the case found me. Something happened in my neighbourhood. I followed it closely while it lasted and the end of it relates with this topic. As we all know, apologizing is hard to do. It’s not fun to realize that you’ve done something wrong. It’s not a great feeling to be told that you were wrong. It’s not really that great to be wrong. But the reality is that we’re all human, and we’re going to make mistakes and when the time comes, I think that the ability to stand up and take responsibility for our mistakes and to say “I was wrong” is really important.

But, the thing about apologies is that they don’t mean anything at all if they’re not sincere. Now, a lot of times, particularly if you’ve really screwed up, the sincerity of an apology is going to be under question. After all, if you’ve made a major mess of things, there are likely some hurt and/or angry people questioning you and your motives. Which is to be expected. Part of making a sincere apology is realizing that people may or may not accept your apology. If you’ve hurt people, they’re under no obligation to read your apology and say ‘Oh, well then, that’s fine.’

It should go without saying, but clearly doesn’t, insincere apologies are no apology at all.
Case in point: My neighbour beat up his wife, threw her things and locked her out, he called the father in law to come for her daughter immediately else in the next hour, he’d meet her dead body. Two days later he began to apologize and wanted the woman to come home but she refused, later he met with members of her family to apologize but it wasn’t welcomed.
Now, the apologies themselves aren’t what I’m particularly interested in. As far as apologies go, they’re… well… they’re apologies. It’s what happened after the apologies that I think is interesting. When the woman’s family didn’t immediately throw out their anger and welcome his apology with open arms, he went about telling everyone: ‘Afterall I said sorry that I beat her and threw her things out, Apparently if sorry isn’t enough for them – what more do they want? He was saying they were reading a lot more into it than is necessary.
A few of us he spoke with weren’t expecting that, his attitude showed no sign of remorse, the sorry act he put up was all fake. He expected them to let go and accept his apology without questioning. Clearly it showed he wasn’t deeply sorry about what he did and his earlier apologies was faux. Apology means nothing without sincere admittance of faults/responsibility acceptance

Now, here’s the thing… if you’ve done wrong, and if you’ve hurt people with your words? Yes, you don’t get to be pissed with and shout at the people who are angry at you. You don’t get to cry “let it go” or “could you please accept that” like they’re unreasonable for being upset. Really, how pathetic does it make an apology look when you follow it up with that, anyway?

I’m still up in the air about whether a shitty apology is worse than no apology at all, but then neither is good.