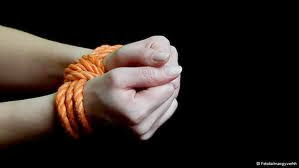 When (the honourable) Arome Ameh sent this story to me *wink*, I just couldn’t help but share it with you. This is the ordeal of a lady who saw all the signs, but ignored it. Read more to know what happened next.

My name is Chizoba, a light skinned,well cultured, well educated and gorgeous lady in my early 30′s.
Please listen to me as I tell my story.

Zizi as I was fondly called by family and close friends was a happy-go-lucky girl with a good sense of style, would party hard with friends and study hard for classes, tests and all. truly very smart street-sharp but unknown to my friends except Bianca, I was still a virgin.

It was a sunny afternoon, sometime in 2004, I was running late for a lecture so I picked up my pen and notepad, ran off, got a bike, and we were there in less than 10 minutes, I got off the bike, checked for my money and found none. Too embarrassed for words but I had to do something fast before the bike rider would. Tried to plead before a guy stepped in and saved me from what would have been an unpleasant scene.

The guy- a very tall and handsome guy- everything any woman could ask for and more physically. His voice was deep and soothing.

There I was still perplexed at my carelessness and in search of words to express my appreciation, when Dozie said ‘hello,’ at that point, all I could do was smile sheepishly. He smiled back at me, revealing the best set of dentition I had seen. I thanked him and we exchanged numbers.

Dozie and I became good friends.

Days ran  into weeks, and weeks into months, and we began dating. He was temperamental and extremely possessive, but losing my virginity to him wasn’t so difficult because for once, I was  in love and mistook his possessiveness for love- he had hit me  few times and raised his voice at me several other times, and somehow he convinced me it was always my fault.

My friends did not know about this. He would buy me gifts to make  up. They liked him so much and thought he was perfect for me.

In 2005, Dozie and i graduated; he, an engineer and I, a banker. Some months later we went for National Youth Service Corp (NYSC), call it destiny or human intervention, or simply (I don’t know what he did) but we got posted to the same state. We still had fights  from time to time but remained together. Both families knew  about the relationship. His mum left when he was only 3, so he grew up with his dad. My family liked him- my mum called him ‘Zizi’s hubby’ and my dad and only brother (Ikenna) thought he was upwardly mobile. Luckily, he got a well paying job 3 months  after youth service and we got married 8 months later. Bianca was my maid of honour.

We lived in Lekki, and lacked nothing- he gave everything I needed, so I became nonchalant  about getting a job besides, my husband asked me not to work until I  was done having kids. Our marriage was somewhat ‘smooth’. Bianca  always lamented about being an ‘unmarried’ banker and she never
failed to remind me how blessed I was to be married. Things went on  well until I got pregnant in 2008. Dozie started keeping late nights and  came up with flimsy excuses for his actions.

It was a warm Saturday, I had  just finished with the chores and was in the kitchen preparing Dozie’s
favourite for lunch (poundo and nsala soup) while he was watching  a movie. His phone rang by 1pm, just then, he came to the kitchen to say he had to go somewhere briefly. I was very upset but kept my
cool. He went upstairs, dressed up and drove off before I knew it.

The time was 9pm and my husband wasn’t back, so I decided to lock up, go upstairs and quickly take a shower before he returned. I was  done by 9.20pm but he wasn’t back yet. I mistakenly left my phone in the sitting room downstairs and had fallen asleep waiting for him in  the room. I woke up by 1am and went downstairs. He was back home drunk, but couldn’t get in because I locked up.

Apparently, he had been there for a while and because my phone was  downstairs, I didn’t hear it ring, so he was furious. When I got the door, I got the most painful slaps I had received all my life, he punched me, pulled me by my hair and dragged me upstairs screaming, ‘why did you keep me out that long?’ ‘What if I was been followed by armed robbers’? Still pulling me. I was crying and begging him but he didn’t let me go, then some minutes later he suddenly left me and dropped on the bed like a log  of wood, was quiet for a while, and began to snore some minutes later.

I was in so much pains, felt blood dripping down my legs… so I managed to drag myself downstairs to call Bianca. She was there by 3 a.m. and took me to the hospital…

To be continued…
0 Likes