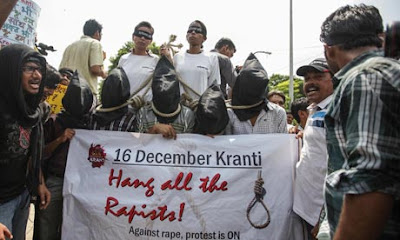 Can the Nigerian government’s justice system be as strong as this? Can they help rape survivors get the justice they deserve? What do you think?

An Indian government minister has said four men found guilty on Tuesday of the gang-rape and murder of a woman in Delhi last year will be hanged.
Sushilkumar Shinde, India‘s home minister, told reporters in Mumbai that a death sentence was inevitable. “We have strengthened the law. [The] death penalty is assured in this case,” he said.

The comments, after the verdict but before sentencing, are unusual and an indication of the government’s concern about public anger over the incident.

The judge, Yogesh Khanna, delivered his verdict just after noon on Tuesday at the end of the seven-month trial at the district court of Saket in south Delhi.

“I convict all of the accused. They have been found guilty of gang rape, unnatural offences, destruction of evidence … and for committing the murder of the helpless victim,” Khanna said.

Akshay Kumar Singh, a bus cleaner; Vinay Sharma, a gym instructor; Pawan Gupta, a fruit seller; and Mukesh Singh, who was unemployed, will be sentenced on Wednesday. Most observers say a death sentence is very likely, though life imprisonment remains a theoretical possibility. Lawyers for the four men said they would appeal and branded the verdict “politically motivated”.

Public opinion in India appears almost unanimously in favour of a death sentence. One TV channel ran a headline asking: “They’ve been convicted, but will they hang?”

The mother of the 23-year-old victim, who cannot be identified under Indian law, sat just a few feet from the four men who stood against a wall in the court as the verdict was read out. She and her husband have repeatedly called for the men, who attacked their daughter on a bus after she had watched a film at a south Delhi cinema, to be put to death.

Outside the courthouse, dozens of protesters chanted: “Hang them! Hang them! “

India has executed three people in the last nine years: a man who raped a 14-year-old girl, and two Islamic militants.

The trial of the men, aged between 19 and 34, started in February, two months after the attack. One defendant, a bus driver, hanged himself in prison in March. The oldest of the six accused, he was alleged by police to have been the ringleader. The youngest among the alleged attackers, who was 17 at the time of the assault, was tried separately and wassentenced last month to three years in a juvenile reform home, the maximum possible punishment under Indian law.

The ruling Congress party was heavily criticised after the incident last December for its slow and insensitive response. Sheila Dikshit, a Congress leader and chief minister of Delhi, called the incident a wake-up call that was “very shocking and very painful and shook up everyone of us, in Delhi and the entire country”.

Ambika Soni, a senior Congress parliamentarian, said the punishment should be “exemplary”. Opposition politicians also said they wanted to see the severest possible punishment for the rapists.

The attack prompted an unprecedented national discussion about sexual violence and calls for widespread changes in cultural attitudes and policing, as well as legal reform. The international image of the country was damaged, with numbers of female tourists dropping significantly.

Since the attack, laws have been tightened and pledges made to improve the investigation and processing of sexual violence cases.

Vrinda Grover, a well-known activist, said the challenge was to make any changes institutional. “There is certainly much higher awareness now … but the Indian system has huge inertia,” she said.

Much of the trial was held behind closed doors, with media excluded for many months. The court heard details of how the victim, who had recently qualified as a physiotherapist, had suffered severe internal injuries when repeatedly violated with an iron bar during the assault.

The victim’s father told the Guardian last week that the family had been disappointed by the three-year sentence given to the juvenile convicted last month. Police have said the teenager was the most violent of the attackers.

All of the men on trial in Saket denied charges of rape, murder and destroying evidence. Two said they had been to listen to a music concert in a park on the night of the attack. One said he was driving the bus in which the assault took place and did not take therefore directly take part in the assault. A fourth, a 26-year-old drifter, said he had left Delhi for his village.

The prosecution case relied on testimony from 85 witnesses, a statement given by the victim before she died, DNA samples, dental records from bite marks on the victim’s body that matched the teeth of some of the men, and the evidence of the victim’s male friend, who was badly beaten in the attack.

The victim and her friend were eventually dumped on a roadside layby on the outskirts of Delhi, and the woman died two weeks later in a Singapore hospital. Her ashes were eventually scattered in the Ganges river near her ancestral village in rural India.

The men were also found guilty of robbing another man earlier in the evening of the incident. Police described how the six had set out from the Singh brothers’ home in a bus on a joyride. They tricked the victim and her friend into boarding the bus and assaulted them shortly afterwards.

There has been widespread criticism of the fast-track court set up to ensure rapid justice in the case, which was one of the most high-profile in India for years.

Gang-rapes, acid attacks and other acts of violence against women continue to be reported across India each day. In one recent incident a photojournalist was raped repeatedly by a group of men in a disused building in Mumbai, the commercial capital. Suspects have since been arrested. The victim of the attack was widely praised for her courage in complaining to police and identifying her attackers.

“Every day I take trains, buses and rickshaws and every day I get harassed one way or another. Last week it was a boy of only nine years old. We have to stand up to them. No one will take the first step unless you take it yourself,” said Shurbhi Sharma, a 19-year-old student in Mumbai.

It is hoped that fast-track courts such as the one in which this trial was held will help improve a poor conviction rate. Last week six men accused of the gang-rape of a law student in October last year were sentenced to life imprisonment by a fast-track court in the southern city of Bangalore.

Many families of victims pressure them not to press charges, police often refuse to file cases for those who do, witnesses are systematically intimidated and courts rarely deliver swift justice in the few cases that are filed. Indian courts had a backlog of 33m cases as of 2011.

In this case, an appeal can first be made to Delhi’s high court and then, if that fails, to the Indian supreme court, legal experts say. Each appeal could take up to a year.

India has executed more than 50 people since gaining independence in 1947 and has repeatedly voted against United Nations resolutions seeking a global moratorium on capital punishment.

The Indian president has the power to pardon or commute sentences.

Three men have been hanged in the last nine years, including Mohammed Ajmal Kasab, the only survivor of the extremists who attacked hotels and other targets in Mumbai in 2008, who was hanged last year, and Afzal Guru, found guilty for his role in the terrorist attack on the Indian parliament in 2001, who was hanged in February this year. The third was found guilty of the rape and murder of a 14-year-old girl.