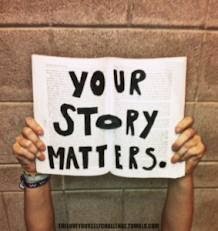 We have been calling for (rape) stories that express courage, strength and bravery. We have had many survivors share their story (read some HERE, HERE, HERE and HERE), this is one from Aduke. Enjoy the read.

This is my story….it’s not a movie… it’s not a script… it’s my reality… it’s my story. I was 8years old… Yes 8years…I’m 32years old now but 24 years would always seem like yesterday when I was deprived of being a child… I want to be a child, crave for it but I’ve lost it forever.

I remember it vividly… My elder brother Emeka had returned from school, he was in the university, we were all excited and happy. We had all gone to the boy’s quarters to stay and greet him… he bought kwili kwili and other northern varieties not common in the east where we lived.

My sisters where there and uncle Obi was there too. Uncle Obi had come from the village not too long ago to live with us he was about 25years old. The same age with my eldest brother. He used to call me his small wife and I would giggle and we would all laugh… I was too small to be his wife but he always would buy me sweets and chewing gum and other things for school. My dad used to give us all those nice things too, so it was no big deal for me.
This night when my bro Emeka returned we all stayed in the boys quarter with him a room he shared with uncle Obi detached from the main house where we occupied with our dad… mummy had left us some years back.
‘Ngo… arrange this room for me, you are last born, let me go and greet daddy and eat bro Emeka instructed and i agreed happily… I always love arranging things and being in the favor of my elder ones.
My siblings started leaving the room.

“Obi how far… make we enter main house go chop na” my elder brother beckoned on my uncle. “Nna make I join later abeg, I get somethings to sort… na your arrival just come destabilize me” uncle obi replied, picking up some papers.

“Ok ooo” retorted my brother as he walked away with my sisters leaving only me with uncle obi.

I busied myself with the room, folding clothes, hanging others and arranging things in their appropriate place, while uncle obi sat up on the bed browsing around some papers. Suddenly like a flash, he spur me, pushed me on the bed brought out his dick and shoved it into my mouth… too confused to comprehend, too overwhelmed to scream, no one would have heard anyway…

The distance from the house to the boys quarter was far enough. I tried to understand what was happening in my small mind… it wasn’t making much sense… why was Uncle Obi putting his pee pee in my mouth? I questioned my mind

He raped my mouth, while he pushed his finger into my pussy… He was like a rabid dog… Ranting in igbo… “nne e wela iwe biko gbaghara biko..”

I cried, He persisted.

His two legs held my hands down while he forced a blow job on me, squeezing my tiny nipples with no breast, inflicting so much pain on my little innocent body.

Then like a cat, he went to my under to try to force his way… using his hands to press over my mouth… I was tired of fighting. I was gasping for breath. I was a chronic asthmatic patient. I was dying

I laid there helpless, tired, drained… all my elder ones were close yet so far… no one heard… no one knew…. They assumed I was safe… I was meant to be safe… it was my father’s house and this was his cousin… His first cousin, who he had employed, took out of the village, who he was feeding…

My virginal was too small for him… He settled on the surface, bruised my clit so hard and came all over me…

He got up… knelt down beside me and started crying and begging me. I was too confused, too sour, too shocked, to even face the reality of what had just happened.

Suddenly he said ‘e gwa nmadu.. agam e gbu gi.. agam a pi gbu gi” ngwa were 20naira mechie onu inu?’ saying that he brought out a 20 naira note…. ( if you tell anyone I will kill you, I will suffocate you, take this 20naira and keep quiet). I ignored the money and just sat on the bed… my body was lame. He walked out of the room.

I managed my pains… finished the cleaning… he had gone to join my elder ones… and they were all laughing and gisting… I could hear them as I sneaked into the bedroom.
I was bleeding slightly from the bruises on my virginal walls…. My mouth hurt so bad… in all I was hurting more in my soul than physically. I couldn’t talk… who would believe me…I would be beaten if I raised such an allegation.. I didn’t even know the name of what had happened to me… I dint know the English word “rape” or what it actually meant.

Did it stop? I wish I would say yes. It took 7 years and a bad move from uncle Obi on one of my elder sisters to bring the menace to an end. I was just 15years.

I had lost childhood, I had lost innocence. But I haven’t lost my essence

I am a survivor. I am strong. And I have a life…

You can rape all you want, but you can’t rape Gods purpose off my life… and the hurt which childhood rape caused me has turned me to a woman full of virtue and strength of character.
I am Aduke!
1 Likes

Standing on the Sidelines By Ejura Salihu