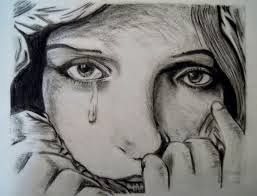 I guess that my difficulty in being able to write about women related themes in my writings stemmed from the fact that when I had grown to the level of self-realisation, my mother who could properly guide me through the mountainous range of knowing and appreciating the opposite sex was no more of this earth, or perhaps because I never grew with a female sibling, or even maybe, because I grew up in a conventional Nigerian family , ferociously grounded in morals, where it would amount to a taboo for a man to ever think of stooping so low to the level of a woman (Infact, God help you if Papa should as much as catch you innocently daydreaming about the opposite sex).
I had methodically embarked on a joyous voyage of Thank-God-I-Am-A-Man themed writings. A moment of introspection had awakened in me and opened my eyes to the wonders and amazing world of being a woman. A task which I will not set out here, but suffice it to say that being a woman is a very beautiful experience. That sadly seems to be on a sharp decline as evinced from the various acts of violence against women. Questions after question continually barraged my mind. What if my future wife was someone who had undergone the damaging and traumatising effects of being raped? What if I am nowhere to be found tomorrow, what will be the fate of my future daughters in a world of prejudiced values against women? What if my only sister, had she been alive, grows to become a victim of rape? Worst of all, what if I had been born a girl, who could tell, if I wouldn’t have experienced such traumatic moments of being dehumanised and downgraded? As these unanswered questions kept nagging at me, I found myself invariably departing from mainstream Collins; trademark Arikor, who naturally is stone-hearted when it comes to matters concerning the opposite sex. Because whichever way you decide to look at it, the issue of rape touches us all in one way or the other. And then an inner voice told me it was time to wear the shoes of rape victims so as to feel how it pinches; it was time to lend my voice to the dastardly act of rape. This monster called rape.
A casual glance through daily newspapers will reveal the alarming rate at which rape is now jostling positions with the now ‘perceived-normal’ boko-haram endemic. For every page that reports about the inhuman activities of the evil boko-haram sect,-which is very many,-there is a corresponding page of a rape report somewhere from Abia to Sokoto; Lagos to Kaduna; Ebonyi to Rivers etc. The customary blaming of the rape on the devil seems out of vogue now( I believe maybe the devil must have angrily cautioned any rapist to mention the devil at the rapists’ own peril). The flimsy and unreasonable excuse now is that the sheer dressing of the victim and her flirtatious lifestyle called for her to be raped!. What sexual appeal, if any, premised on her dressing, a five-year old toddler has can best be answered by the rapists themselves.
There is no gainsaying the fact that our society is a jaundiced and bigoted one, where malehood reigns supreme. And so we were born into such a defective system, and we find ourselves as men, being tutored to exalt ourselves above our female counterparts-even our elders, thus our lives are shaped by this society-accepted ill. A judge of the Court of Appeal once captured it concretely when he held obiter, that our own society is of a patriarchal heritage, where everything ought to be done according to the wishes and whims of the man!. What a myopic view? And so, the woman finds herself at odds with a father who desires to choose her husband for her, or his ‘happy’ thoughts whenever he recalls the handsome sum she would fetch as brideprice, or even the so-called husband, whom she is expected to submit to his sexual urges-however unreasonable. If the husband ever forces her to have sex against her will, that is not rape!. We now have many animals, to say the least, roaming in the body of humans, holding on to their bigoted and short-sighted views that every woman ought to be ravished and subdued. I know my future children-male or female-will never forgive should they ever find out that I had the opportunity to speak against this evil and I never did.
In short, the damaging ordeals which society imposes on women leaves much to be said. In a not-long-ago rape trial, after the victim had painstakingly narrated the heart-wrenching pains she went through, the judge still dismissed her claim based on expert opinion given male medical doctors, who opined that she could nonetheless consent to the sexual act even in a drunken state, and because a former girlfriend of the accused had testified that he was a ‘gentleman’ who would never force a lady to sleep with him against her will.

In another scenario, a lady’s claim of attempted rape was dismissed because the accused person had only removed his clothes after entering the room she was in and locked the door, when( thank goodness) he was interrupted by someone else. In the words of the judge,”…the actions of the accused cannot amount to attempted rape, for he was only in the process of having a connection with the lady and nothing more…!” Whatever the judge might have meant ‘connection’, only him can sufficiently explain, whoever told him that the lady wanted to enjoy the unwarranted and unjustified naked sight of the accused man? In yet a disturbing scenario, a clear and established case was struck out because the accused led evidence, which was easily believed by the court, that prior to the rape, the victim had told him of her numerous earlier sexual escapades and one-night stands with different men. On the day of the rape, she had gone out with him and had started kissing him amorously at some point, which consequently led to his arousal… I guess the judge in this case had no difficulty forming the words: cheap slut! dirty whore!! common prostitute!!!. You deserved what you got!

There abound cases where women who might be shy or unspoken are forced to graphically paint the lurid pictures of the ordeal they went through, much to the pleasure and joy of the audience. They will have to re-create the unsavoury scene, from grabbing her against her will, to pinning her down, to beating her up in order to subdue her, to the shredding of her clothings, to the dastardly act of invading the essence of her womanhood, only for such cases to be thrown out on basis of technicalities. All the mentioned instances, are, of course, obtained abroad. I don’t have to describe what is seen here, for everybody knows of the absurdity of our legal system.
We have a further situation where the male folk having adorned themselves with pornography, which basically reduces women to mere vaginas, breasts and buttocks, will set out to experiment what they’ve seen. And when the desirable becomes unavailable…we have cases of fathers raping daughters, brothers raping sisters, uncles raping nieces and so on. I don’t have to tell of the numerous women whose lives have been threatened should they ever speak up against the ordeal they went through.
The time, I believe, has come when the status quo ought to change. Guys, take my advice, which is a very good antidote. Whenever you see a semi-nude woman, or even a nude one as some of them prefer, just become momentarily blind. Again, this issue of the man having dominion in a marriage or relationship should stop. Granted that the Holy Scriptures designated that the man should be the head of the home, it never said to the point of annihilating the woman!. For all I know, marriage is a contractual agreement between consenting adults of equal status. Where then lie the basis of positing that the women ought to submit to the sexual urges of the man, for he owns her, her body and even her soul? If the marriage was premised on a consensus ad idem from both parties, then the consumation of same likewise ought to involve a consensus from both parties.
Finally, as a word of quintessential wisdom to fellow men, there is a great difference between wishing pain and suffering on someone and actually inflicting such pain on that someone. The traumatised survivors of the various boko-haram engineered bombings will easily attest to the truism of the above statement. The pains they go through is not different from that of many a rape victim. Civilisation should be the key word here. And to be civilised, one doesn’t have to see the four walls of a classroom. The psychological make-up of women does not allow for such ordeals we put them through, so don’t ever self-delusionally believe that that women actually enjoy being raped. Even a prostitute takes offence at being called a prostitute, how much more the innocent and decent woman you have to unleash your animalistic tendencies on? Infact, to say that any man who rapes a woman is an animal would be insulting to animals. It is time to cage that monster between our legs. And if any man feels he is too prominent to obey this simple rule, well, as the Igbo adage goes: “When the hen digs an unfathomable hole, it should not run away from whatever comes out of the hole.”
AUTHOR’S NOTE: This article owes its inspiration to: Oghosa Annabel, Victoria Nkechi-who unknown to them, readily provided their brains for me to pick, in order to fulfil my selfish ambition of relieving my competency in writing. Nkechukwu Andrea, Kosisochukwu Goodness and Imosieme Khadeejah-for leading me through the intricacies and delicateness associated with womanhood. Ogochukwu Ethel-who assumed the role of a mother in my life and taught me what every true mother ought to teach her son(s) concerning the female gender.
0 Likes