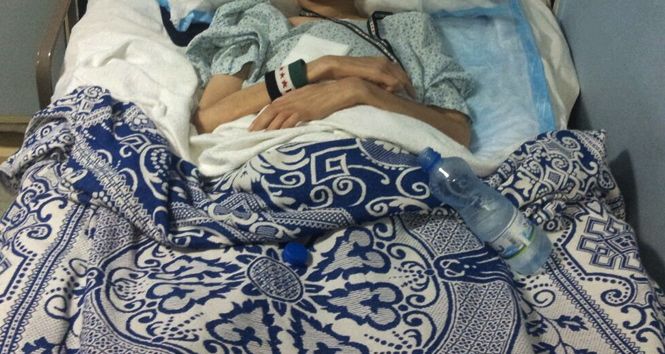 Alma Abdulrahman is lying gaunt and unable to move anything below her diaphragm in a hospital bed in Amman. Some bedsores have become so deep she’s having surgery tomorrow. Screws hold together her upper vertebrae, and cigarette burns pock her right shoulder. Her voice fades in and out, hoarse from either weakness or morphine.

Six months earlier, she was paralyzed when a regime soldier struck her in the neck with a rifle on a street on the outskirts of Damascus. Now, from a guarded hospital room, she wants to be heard, and what she has to say is deeply disturbing.

Alma Abdulrahman is one of the very few women in the Syrian conflict to speak out about having been raped. While she offered to use her entire name in this story, I’ve used only her first name and a family name because of safety concerns.

She has already received severe punishment, she says, as retribution for her role as a battalion commander in the Free Syrian Army. “I served at a very high rank in the army, where I was responsible over men who had to listen to me,” she says.

Unusual for her forthrightness about the rape itself, Abdulrahman is also the rare Syrian woman who has discussed her role in the FSA, which she joined very early in the revolution. Formerly an accountant, she says she rose to the rank of an FSA battalion commander and was in charge of about 15 men at a time. She says she has killed “many, many” men — at least nine, at her count. With her slim, tall figure, she was sometimes even able to pass as one, she says.

Over the course of a few days in June, Abdulrahman described what she says are the details of her torture via Skype from her hospital bed. It is a series of interviews that almost didn’t happen. Her first, short interview was given to Al-Arabiya on June 6. After this, a person connected to the case told me, a man from the Jordanian government visited her hospital to let the administration know that he was displeased they were treating a “terrorist.” All interviews, including my plans to speak with her, were canceled. Through the cooperation of various medical and social workers in Amman, we were eventually able to connect. While tired, she agreed to speak multiple times through a translator and repeat what she made clear were painful memories.

Abdulrahman is from an area in the southern part of Damascus called Al-Midan and had four children at that point. She was living a double life, fighting “during work hours” to hide her FSA world from her husband.

One day in April she had gotten caught up in an incident in which a regime soldier was severely beating a 16-year-old boy at a checkpoint. Sick of the constant brutality, she says, she tried to intervene. This is what led to her own beating and incarceration by the Assad regime.

During dark sessions over a period of 38 days, guards whipped her with a wire, strung her alternatively by her wrists and feet, and injected the crook of her elbow twice a day with a kind of drug that made her feel high, she says. The things Abdulrahman recalls the men saying as they allegedly raped her multiple times were so filthy she is loath to repeat them — “it’s too dirty and too low” — although she remembers them saying, “Here is the freedom you wanted” (a phrasesimilar to ones other women have reported hearing while being raped in Syria). And she can summon up at least one face. And a couple of names.

Within an hour of her arrival at the detention center in Harasta, about 7 miles (12 kilometers) north of Damascus, where she was held in a cell with 20 other women, she says she was roused to consciousness and her torture began. She describes being gang-raped daily by men who smelled strongly of alcohol. Floating in and out of consciousness, she would kick and yell as best she could while lying next to another woman doing the same.

“We were all blindfolded and raped and we would not know who was raping us,” she says, tearing up for the first time in our interview. Before being blindfolded, she could see what she calls the “boss” sit in front of them, teaching them “exactly what to do and say to us.”

“They were ordered to take this one, to take ‘your portion,’” she says. “And they would take it.”

Abdulrahman describes to me how she and one other woman from her colorless cell, college-aged, were usually taken together to another room with no furniture and raped. She remembers clearly the face of one man who tortured her. He was “very, very tan,” she says, “very, very thin,” and balding, she says; he was one of the men who would hit her while she was hung from the ceiling.

Later, her same acquaintance would be afraid to return home after what happened to her. Abdulrahman says she helped arrange for the young women to get surgery that would restore her “virginity” — a not-uncommon practice or desire for women raped in Syria, from what I’ve learned. In Amman in May, I spoke to a surgeon who had tried to refer a young woman to a gynecologist for similar treatment at her request. (The survivor was too frightened to follow through, the surgeon said.)

Back in the windowless, bare cell with about 20 other women, no one spoke much, Abdulrahman says. They hardly slept. The women “were emotionless,” she says.

Abdulrahman says she knew that at least seven of the other women in her cell were tortured, but doesn’t know about the rest. The women were forcibly folded into tires and beaten, she says. Sometimes they would have salt rubbed into their wounds to maximize the pain, a relatively frequent description of torture in Syria’s war. When asked if she remembers any particular names of the guards in the Harasta center, she says the name “Basel” is one she recalls, and possibly “Mazen.” According to another source, Basel carried out many rapes at the Harasta center. Another name Abdulrahman remembers is Mohamed Rahmoon.

Rahmoon was known to be head of the detention center, according to various Syrian activists I spoke to. Multiple websites have reported that he was kidnapped in April 2012 and found dead in a hospital in July. Abdulrahman has a clear memory of speaking to him the day she was released.

“He reprimanded me,” she says, “for being a part of the revolution.” And with a warning not to repeat what had happened to her, she was released. Whether a bribe was paid this time around, she isn’t sure.

Unlike a man I met recently in Jordan who was held at what appears to be this same Harasta detention center, Abdulrahman was detained clothed. She had on a shirt, jacket, and pants. Mazen, 47, the Syrian refugee I met in Amman in May, said he was held nearly naked in a freezing, underground cell. His detention was in February, he told me, and involved 16 days of being strung by his hands from the ceiling with only his toes touching the floor. He said the 50 men in his cell slept in shifts so a few could sit to sleep at a time. When I met him, he was unable to use his right hand because of the torture. He was willing, however to stand against a wall and demonstrate how he was suspended over a mixture of water and diesel fuel that would make him slip around on his toes.

“I could do this forever,” he joked.

But Abdulrahman isn’t at the point of making jokes yet. What would happen to her after her release would only involve more pain — it would be just a couple months before her neck bones were broken. First would come a second month-long detention in a government cell in Fir’ Al-Khatib in Damascus in October 2012. The torture continued during this second detention, she says, but not the rape.

The day she nearly died a couple months later, a man — a friend — in the FSA using the pseudonym Abu Bakr was shot for having organized an attack at a regime checkpoint. As she was poised over his wounded body, Abdulrahman says, he gave her his prayer beads. It was then that a soldier struck her in the neck with his rifle. She was six or seven months pregnant with her fifth child at the time. (The child would be delivered at nine months in a Syrian hospital via a C-section.)

A series of stays in various hospitals in Syria then Jordan would follow, leading to her eventual rest for now in this particular hospital in Amman, where she recently received the news that her husband, disgusted by her rape and FSA work, was marrying a new wife. Her children, she says, remain with him.

Alma Abdulrahman’s story fits her name — alma can mean a number of things in Arabic. It can mean “dark” or “black” but it can also refer to a lush kind of tree that is a metaphor for beauty. And the horrors she describes have positioned her to become the face of powerful women survivors in Syria. She says she has fought and killed; she also says she has done it for her country. She says she has endured torture and violation but that she is “capable of standing up against oppression.” Speaking out has been a decision she has made after many months of being told to stay quiet.

“We have to share this with the entire world to show that women are fighters,” she says. “The Arab woman is very strong. All she needs is just a little freedom.”

Curled from Women Under Siege
0 Likes

Poetry: She Lives (Follow-Up on Ruined Goods) by Debra Ayis