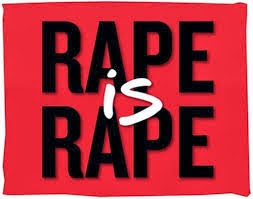 The increase in rape and sexual abuse cases is alarming.It is not peculiar to any culture, sect or race; rather it isa global problem, more like a disease that has plaguedour communities. This menace needs to be nipped in the bud and eventually eradicated. This crime that has ravaged different societies for a long time and still is. Our young men rape and gang rape women, young ladies and now our underage girls. I wonder if it is a need for sexual gratification or the need to be in control.Is there really any justification for rape? The answer is NO!
Rape is a barbaric act perpetrated by individuals who lack self-control, are rejected by women or arepsychotic. Simply put, rape is the unlawful compelling of a person by physical force, coercion or duress to have sexual intercourse without the person’s consent. It could also occur by obtaining consent fraudulently, by getting the victim drunk or drugged.
Usually, men are the perpetrators of this crime of rape, but in recent times, there have been cases of rape perpetrated by women (approximately 1% of women are rapist). Nevertheless, it is evident it is a gender-based crime as majority of its perpetrators are Men.
Rape is a criminal offence and is punishable by law. As a form of sexual violence, rape is usually perpetrated bysomeone close to the victims. Research has shown that most rape victims know the perpetrators of the act. This shows that rape can be carried out by close relatives, friends, persons in relationships, strangers and of coursewithin the “context of marriage”. I am pretty sure eyebrows have been raised at this point and probably dropping of some jaws at the mention of “rape within marriage”.
Oh Yes! Rape can sometimes occur within marriage; hence the terminologies ‘Marital rape or Spousal rape.One may ponder how? Because of the biblical license tohave sexual relations in marriage. Undoubtedly,frequent sexual intercourse is one of the dividends of marriage, but sexual acts must be consented to by both parties (Husband and Wife). In the event that one party refuses to engage in sex and there is coercion on the part of the other party; there exists an element of rape.
Coercion.
Coercion occurs when one party does not consent to the act of sex. So if your husband coerces you to have sex with him he has raped you plain and simple; the singular fact that he is your husband does not make the act any less RAPE. Many men hide under the clog of “I am her husband and can have sex with her whenever I like”. Really? What happens to mutual consent between a husband and a wife for sexual relations? When a mandoes not want sex can your wife coerce you into it? The answer is NO.
If a husband and wife mutually agree to have sex, then consent is actual, if they both engage in it without either party refusing then consent is implied. However, in the absence of the consent of one party and there is proof of coercion and assault then there is no consent and that would amount to rape and sexual abuse.
We can classify this form of marital rape as “civil rape” – rape by trusted individuals; which is now an rampant.Remember FORCED SEXUAL INTERCOURSE IS RAPE IRRESPECTIVE OF THE CIRCUMSTANCES!!!!
Rape by a husband is an abuse of his position ofauthority. Why do some husbands have to coerce their wives to have sex and even degenerate to using physical force to achieve their selfish interest. I have heard nasty remarks like: “My wife enjoys when I rape her” I beg to disagree? You mean you as the husband derive pleasure in raping your wife. I believe rape is a choice and anyone who rapes his wife makes an active choice to dehumanise and sexually humiliate his wife.
Below is a link on how a husband drugged and raped his wife for three (3) whole days; she has just had a baby. What man who has a conscience will do that to his wife even if he had been sex-starved. What happened to self-control and mutual consent to engage in sex. This is Rape plain and simple.
“Our society is so tolerant towards the abuse of women which has become the syllogistic justification for rape is befuddling ~ (@Leke Alder #Letr2Jil)”. No woman wants to be raped, no woman enjoys rape. Undoubtedly, sex is consensual in marriage, however, a partner should not coerce or use any form of physical violence to subdue his partner.
It is humiliating and most times a violent experience for women. The victim will feel ashamed and would not know how to feel and cope with the rape incident and may find it difficult to confide to another about it. This kind of rape is hard to detect because no woman will be able to report the incident to anyone. It sounds bizarre saying; “My husband raped me”. How will you be looked at? That is because there are lots of people out there who believe a man can never rape his wife.
Marital rape (widely known as spousal rape) is an overlooked crime; it is a non-consensual intercourse or other sexual acts in which the perpetrator of this dastardly act is the victim’s spouse. Spousal rape is not limited to married couples alone; it includes rape between unmarried co-habiting partners or couples in a relationship. This kind of rape is a form of sexual violence which goes hand in hand with domestic violence.
To be continued…
0 Likes