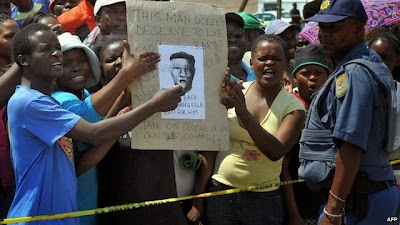 I just saw this on BBC Africa (thanks to a reader who sent the link to me) and I was shocked! Two bodies of two girls, aged 2 and three, were found after being raped by five men! Violent crime rate in South Africa has been on the rise over the years and the rates of rape cases have always topped the chart. Children meet their untimely death because one man couldn’t control his libido. This is something that should never happen to anybody’s child.

Four men have been charged with the rape and murder of two toddlers in the South African township of Diepsloot, north of Johannesburg.

A fifth suspect was arrested on Friday after police issued an identikit photo.

His arrest sparked violent protests outside a police station in Diepsloot as hundreds of demonstrators demanded he be handed over to the crowd.

Police fired rubber bullets to disperse those who had blocked a road and were throwing stones and burning tyres.

The bodies of two girls, aged two and three, were found dumped in community toilets on Tuesday morning.

The girls, who were cousins, went missing on Saturday from outside their home while playing with friends.

Earlier this week, President Jacob Zuma urged people not to take the law into their own hands.

South Africa has one of the highest rates of sexual violence in the world. Police figures show that 64,000 cases were reported last year.Police reward

According to the South African Press Association, the girls’ funeral is going be held on Saturday.
Continue reading the main story
“Start Quote

This is something that must never happen to anybody’s child,”Nomvula MokonyaneGauteng province premier
South Africa’s violent society

The fifth suspect was arrested early on Friday morning in Alexandra, a township in Johannesburg, a day after his photo-fit image was released along with an offer of a 100,000 South African rand award ($10,200, £6,300) for information.

He is expected to be charged on Monday.

The case of the four men charged in the Pretoria Magistrate’s Court on Friday was postponed until next Thursday to allow for them to seek legal aid.

Diepsloot, in Gauteng province, is a shanty town with little infrastructure, where the vast majority of residents are unemployed.

Competition for jobs often leads to friction between local residents and foreigners.

Following the discovery of the girls’ bodies on Tuesday, foreign-owned shops were looted and Somali shop-owners told the BBC’s Somali Service that they had to flee the area until the police arrived.

“This is something that must never happen to anybody’s child,” the Gauteng premier said outside the girls’ family home.

Earlier this year, South Africans were shocked by the gang-rape of a 17-year-old girl who later died in hospital.

One man last week admitted his part in her killing.

It was an attack that saw South Africans drawing parallels with the brutal rape and killing of a 23-year student in India’s capital, Delhi.