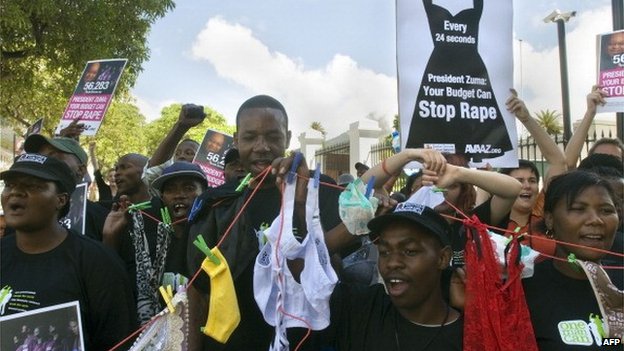 According to the BBC, a South African man found guilty of the rape and brutal murder of a 17-year-old girl has been sentenced to two life terms in prison by a court near Cape Town.State prosecutors had requested this sentence – without parole – for 21-year-old Johannes Kana.

Anene Booysen died in February, hours after she was mutilated in a gang-rape and attack that shocked the country.
South Africa has one of the highest rates of sexual violence in the world. ‘Shocking and inhumane.’

The BBC’s Nomsa Maseko at the court in Swellendam, 220km (136 miles) from Cape Town, says Kana’s uncle clapped his hands and laughed as the judge announced the sentence.

“This is a joke,” he said, adding that the system was unjust.

But many of those attending the trial feel justice has been served, our correspondent says.

Ms Booysen was left for dead at a construction site near her house in Bredasdorp and later died in a Cape Town hospital after she had been raped and disembowelled.

At the time President Jacob Zuma described the attack as “shocking, cruel and most inhumane”.

He called for courts to impose the “harshest sentences” for sexual crimes.

During the trial, doctors who treated Ms Booysen described her horrific injuries – one said they were the worst injuries she had ever seen.

Just before she died, she reportedly said that five or six men had been involved in the attack.

Three suspects were initially arrested but only Kana stood trial.

He confessed to raping Ms Booysen but denied killing her.

Meanwhile, charges against four of five men accused of kidnapping, raping and killing two young girls in Diepsloot, a shanty town north of Johannesburg, were withdrawn at the Pretoria Magistrate’s Court on Friday.

The state prosecutor said evidence showed the men were not in Diepsloot at the time of the crime earlier this month.

A fifth man remains in custody and the case was postponed until 27 November to allow for further investigation.

Police say that a child is raped every three minutes in the country.