Silence Isn’t the Solution –– ‘My in-laws felt that if I pursued the gangrape case, it would bring disgrace to them,’ says Ragini

Silence Isn’t the Solution –– ‘My in-laws felt that if I pursued the gangrape case, it would bring disgrace to them,’ says Ragini 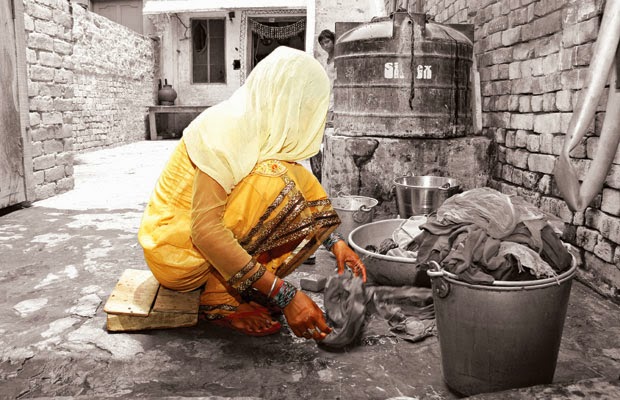 We’re in the Atail-Idana village that comes under the Gohana tehsil of Haryana’s Sonipat district. A bunch of children are playing cricket in a field. When we ask them the address of Sunil of the dhanuk community, they exchange suggestive smiles and then point towards a house across the field. One of them, who turns out to be Sunil’s relative, throws his bat on the ground and says, “Sunil and his parents are not home. The door will open only if one of us knocks.” The boy brings us to Sunil’s house. “Get the door opened, a lady is here,” the 12-year-old boy calls, knocking at the door.
Two girls, aged between 10 to 12 years, open the door. In the courtyard, we see a shed for buffaloes behind which a girl veiled in a sari is washing clothes near the handpump. This is Sunil’s wife, Ragini. The girls who opened the door are Ragini’s ‘family sentinels’. Ever since 28 September 2012, Ragini’s in-laws keep a close watch on her. She is not allowed to talk to anyone. She cannot answer the door nor can she receive a call if the phone rings. If it is hot inside, she is not permitted to even sit in the courtyard and every time she has to go to the lavatory, she must take someone along. They do not trust her and hate to even look at her.

Ragini’s life was not always like this. She got married to Sunil last year and like any other young 19-year-old bride, she dreamt of a beautiful life with her husband whom she loved. But a horrific incident turned her life upside down. On 28 September 2012, Ragini was gangraped by four men for five days and four nights. She managed to escape, but the incident left her being called a whore, a thief, and a woman without character. Despite being the victim of such a heinous crime, the girl had to bear the brunt of familial and judicial neglect. Her story paints a distressing picture of the bleak future of rape victims.

Sunil is a hawker who sells utensils and his father is also a vendor. They are not at home today. Allowing me into her single-room house, Ragini tries to send the two ‘guards’ away by engaging them in some work. She whispers, “I must send them away, or they will tell my mother-in-law everything. I’ll be in trouble. They always leave these girls to spy on me.” When I tell her to share anything in her heart with me, she cries and says, “I only wish to die, didi. I would have killed myself long ago. But these people do not leave me even for a moment. I am helpless.”

In September 2012, Ragini had gone to visit her parents for the first time after her wedding. Her parents belong to the dhanuk community and so their home stands at the furthermost end of Banwas village. Coming under the backward class category, this community has traditionally done the work of cleaning the houses of upper-caste people and cutting grass. But Ragini’s parents work as bonded labour and rear buffaloes on lease. Ragini’s mother, Santosh, says, “We had saved money for years to marry our daughter. She had come home for the first time. Then, four boys kidnapped her from the railway-crossing near the village. She returned after five days in a bad condition. We wanted all the culprits to be punished. We even reported it to the police. But then the villagers and our community put pressure on us. We had no option but to withdraw the complaint.”

This incident happened in the same month of September 2012 when 20 such rape incidents in Haryana had grabbed national headlines. Ragini says, “I had a neighbour Maphi, who owns a beauty-parlour and also taught me sewing. On 28 September, she told me that my husband had called several times and wanted to meet me at the crossing. But he was not there.”

Instead, she was kidnapped by two men, Sanjay and Sunil, from Gohana Phatak. In a white car, they took her to an isolated room in the middle of a rice-field on Gohana-Khakrohi Road. Two other men were present there – Anil from Ahmedpur Majra and Shravan from Hitadi. Ragini continues her story, “I was made to sniff something that made me unconscious. When I regained consciousness, I was lying in a room that housed a water pump in the middle of a field. They were upon me, biting and pinching me. They watched dirty videos on their mobiles, laughed and clawed at me. I was without clothes for four days. They took me to Kurukshetra and from there to Panipat. I was wearing some jewellery that I had received on my wedding – ear rings, anklets and a ring. They sold everything and handed me an old, torn salwar kameez. I begged them to leave me, but they only laughed at me. Somehow I got the opportunity and secretly phoned my father. The police came to rescue me. But by then, five days had already passed.”

Ragini and her family claim that Maphi was involved in the crime too, but they had to get her released. Santosh tells us, “After we reported the incident, we came to know that all the four boys were from our community. For the first three months, while supporting us, the villagers insisted that we get Maphi released, while the four boys should stay in jail. It became a matter about the honour of the village. As a result, we had to withdraw our statement against Maphi. Then we started getting pressurized to do the same for the four men as well. For 10 days, people from our community sat outside our door. The elders from the boys’ families also arrived. Then Ragini’s in-laws came too. They said that their son’s life was being threatened. A girl cannot marry again and her in-laws might not have taken her back. So we had to withdraw all the charges.”

Ragini says, “I was helpless. My in-laws felt that if I pursued the case, it would bring disgrace to them. My husband’s life was also in danger. Everyone said that if I wanted my in-laws to accept me again, I should change my statement before the court and say that I was not raped, that during those five days I was at my in-law’s place. I was told to state that the medical reports were such because I had been intimate with my husband. I did what I was told. Everyone was present there. I couldn’t speak the truth.” On 24 April 2013, additional district and sessions judge Manisha Batra sentenced Ragini to 10 days in jail and a fine of Rs 500 for giving a false statement in the court.

Vice-president of the Rashtriya Janvadi Mahila Samiti, Jagmati Sangvan calls Ragini’s story a tragic example of the societal pressure put on rape victims in the absence of rehabilitation policies. She says, “It is one of the most heinous rape incidents. Even the judiciary could not see that the girl was under pressure and passed the verdict against her. Clearly, the ground reality is that even the new laws have failed to give justice to women.”

Meanwhile, Ragini’s nightmare continues. When asked to lodge a complaint with the police, she says, “There is no question of it. Everybody here thinks I am guilty. They say that I knew those men and had run off with them to have fun. Even if I comb my hair or sit in the courtyard, my young sister-in-law and brother-in-law pass comments like ‘Who are you enticing now? Haven’t you been satisfied yet?’ They call me vulgar and cheap. My mother-in-law taunts me for not bearing children. Even my husband doesn’t understand. He also believes that I ran away willingly. I can’t even breathe and you are talking of going to the police! What was my fault? I would want to see those criminals get a heavy punishment. But it’s not in my hands. I am supposed to stay silent. So I stay silent.”