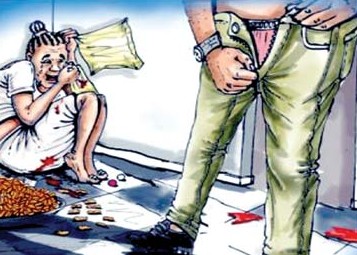 A 22-year-old undergraduate of Caleb University, Lagos, Ugochukwu Agudosi, has been arraigned before an Ikeja Magistrate Court, Lagos, for allegedly raping a lady in an uncompleted building in Ikeja metropolis.

The undergraduate, who was arrested by Policemen at Area ‘F’ Command, Ikeja, Vanguard, gathered, had been remanded in prison custody over a similar offence.
It was gathered that Ugochukwu’s first victim was a 22-year-old lady (names withheld), who was his senior in school.
His modus oparandi, it was gathered, include chatting up his victims on Black Berry.
Along the line, he would invite them for a date, a plan his victims usually fall for because of his posh car. Rather than take them to an eatery as anticipated, he would take them to an uncompleted building in Ikeja Government Reserved Area, where he allegedly raped them.
Police sources said: “Immediately he raped any of his victims, he would delete their contacts from his BB chat.
Nemesis caught up with him after one of them, who turned out to be his senior in school, reported to the Police, leading to Agudosi’s arrest.
He was charged to court and remanded in prison custody because he could not meet his bail conditions, but was later released.
When the case came up for hearing, the lady said she wanted to withdraw the case. This made it difficult for policemen to continue with the prosecution, since there was no direct witness.

Just after his release, he reportedly attacked this 22-year-old lady. The incident reportedly occurred on August 27 at 8pm.
The lady was said to have reported the case at the Area F Command, which led to the re-arrest of Enugu State-born Agudosi. Helpful Tips for Girls to Protect Themselves