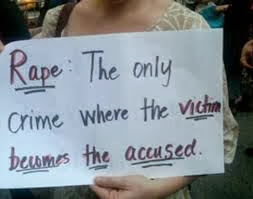 One day at lunch, a group of four young men seated by me were having a discussion about a rape video. They chatted so loudly about it I had no problem tuning my ears for better reception. Any ways, even though they had no knowledge of the perpetrator and victim, they spoke as if they did. All except one agreed that the lady deserved what she got and was to be blamed. The lady represented a case study related to their own experiences.

I listened as they bragged about their rape escapades giving counts of the number of girls they’d raped as proofs. Some were hailed for ‘doing’ more than the others. To them, rape is an act of dominance and gaining control over difficult unwilling girls ––  it’s used punish and degrade them.
In this century, it is just unacceptable to have a person forced to participate in a sexual act with another through the use of force and to say they saw rape as an achievement did more than shock me.
It’s sad that we still have a culture of silence and victim blaming because of this the unblamed/uncaught perpetrators go about their usual lives with no care in the world. Without second thoughts about what they’d done, they are roaming free, prowling, sadistically plotting their next moves, yet the silent victims remains stationary living each moment in agony. Society itself hasn’t been of much help because they have failed to adequately discuss the issue or treat victims with dignity. For this, victims are afraid and ashamed to report their ordeal for the fear of getting judged for being promiscuous, as if they are responsible for the cause. This is obvious in the massive level of under-reporting by victims.

Rape is unjust and affects the victim deeply. They experience a drastic reality shift, they see life and themselves in another light different than before. Feelings of anger, fear, shock, denial and confusion sets in coupled with the shame and stigmatization. In some cases, victims who can’t bear the pain of living in caged silence are often driven to commit suicide.

It is better to conquer silence by speaking out. To break this cycle, rape victims must start by breaking the silence, this will lead to the path of recovery and help victims become survivors. For any survivor reading this, you don’t have to go through it alone, it is a must for you to rise above the chains and break the silence so that you can identify and become part of people who truly understand your struggle.

Rape is a crime and in fact an epidemic: if a disease breaks out, it is publicly addressed hence, the subject of rape “should” also be discussed openly and constructively as well. It is life threatening and not to be treated as a joke. Rape is something people are afraid of, but feel free to #SpeakOut. If everyone stays silent, rape will continue to happen with nothing to stop it, therein the cycle needs to be broken.

I have to say that we as a society need to change our mindset towards rape by not making it look less awkward and shameful instead let us contribute our support to rape survivors. It is important we start the walk with them to encourage them #SpeakOut. As soon as enough people join the cause there will be revolution and rape will no longer define who people are. We all must stand to #EndRape