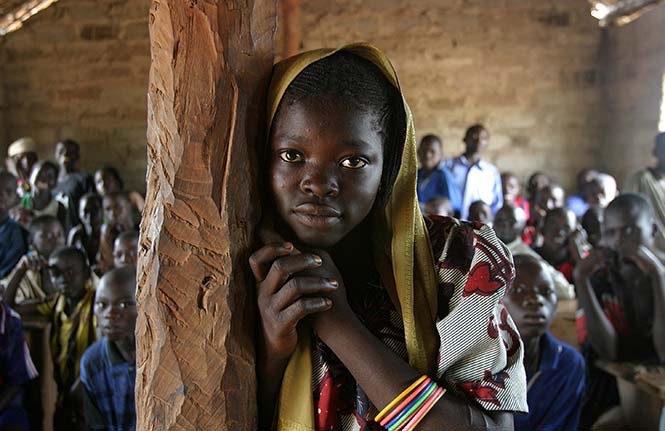 A tweet from the London-based online newsmagazine ThinkAfricaPress, posted on September 3, reads: “Central African Republic Moves to Disarm Rebel Fighters. Some of those will be children.”

The tweet links to an article that discusses the humanitarian crisis that has threatened CAR’s population: The country has been “plunged into chaos,” with “children, some as young as 12 … carrying weapons and operating checkpoints,” the article says. The other part of the tweet refers to news of a disarmament program launched on Wednesday in response to the violence that has swept the unstable country. Authorities have called on armed rebels and civilians to turn in their weapons for the next 10 days, the reports say.

But the tweet’s emphasis on children underscores that this has become a conflict rife with human rights violations more than 3,500 boys and girls have been recruited into armed groups in the Central African Republic since the conflict began, according to an August report by the UN Office for the Coordination of Humanitarian Affairs. Save the Children has said that more than 100,000 children face disease, sexualized violence, or forced recruitment into the country’s armed groups. The organization has begun launching health care programs for the survivors of sexualized violence and providing support to the country by distributing medical equipment to health care centers.

Sexualized violence against both children and women has also reportedly become a mainstay of the fighting, which has developed over many months.

In late 2012, rebel groups took over local towns in the Central African Republic. The groups eventually reached a peace deal with the government in January, which broke in March when Seleka fighters, a coalition of rebel groups, stormed the capital. The government was overthrown and President François Bozizé was forced to flee the country. Now, by launching the disarmament program, authorities are attempting to stem the violence that has ravaged the country.

A May report by Human Rights Watch documented “grave human rights abuses against civilians, including pillage, summary executions, rape, and torture by members in Bangui.” The report also included interviews with women who have said they were raped.

“I was in my house, where I live with my younger sister… when many Seleka fighters entered the quarter. I am 33 years old and my sister is 23. She was eight months pregnant when they raped us on March 25. They were shooting in the air in front of our house. Two armed men entered the house, threatened us, and forced us to get undressed and lay down on the ground… They both raped us, one after the other. They were shouting bad words in Sango and in Arabic. One of them was shouting the Arabic word charmouta (prostitute in Arabic) while raping me. Then, they left the house. Our neighbor took us to the community hospital, where my sister lost her baby the day after.”
Read more via Women Under Siege
0 Likes