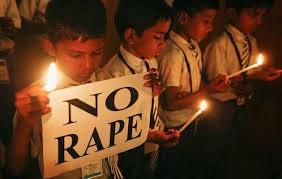 Having successfully dealt with the increasing tenor of rape in Nigeria in RAPE: A TIME BOMB WAITING TO BE DEFUSED (read HERE), this article tends to focus on the effects of rape on victims and some hopes to them. The first thing that comes to a girl’s mind during rape or an attempted rape is pregnancy and the fear of contracting any sexually transmitted disease. This tear jerker state usually leave the person in a confused, pitiable and often times, a defenceless state. After losing her dignity and self-esteem, the victim of rape goes through intense and most times unpredictable emotions.

This acute phase is usually characterised with the victim’s inner denial that the assault never occurred. This way, she tries to convince herself that she was not raped. She also experiences flash backs, nail biting dreams or nightmares, anxiety, feelings of humiliation, shame, and a strong desire to disconnect herself from the victim. Psychologists call this victim blaming. She could be blamed for flirting and dressing provocatively. She is usually scared of being alone, hardly gets settled in a crowd and finds it difficult to relate with the opposite sex. If she does, she could be domineering and rude.

The adverse effects of rape on a woman usually take months and by extension years to douse off her mind. She may make premises and conclusions that she will never get hitched to any man. Some even get mad only to be admitted in the asylum; especially those that have reserved their virginity for the right man. All the principles that propel their lives as a rule are kept at bay. To them it is a fate worse than death. After experiencing this baptism of fire, some victims after a due length of time look towards the sunshine and nit the shadows. They first go for a medical check-up, whether negative or positive some of them look towards the future and accept the fate that their chapter of accidents is only meant to make them stronger and wiser and not crestfallen for life. They see it as a passing and reorganizational phase for them.

Rape victims should not be stigmatized in the society. They should be treated equally and fairly as other ladies would be treated. They should be encouraged so as to inflate their hopes in what the future holds for them. They can also apply as a palliative remedy the abreative method of doing or saying something like praying repeatedly or doing or saying something constantly to exterminate the feelings that it ever happened. Victims of rape are human beings like us and as such they should be given comfort.