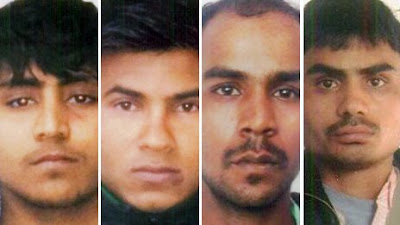 An Indian court has sentenced four men to death for the gang rape and murder of a student in the capital Delhi, a case which led to violent protests across India and new laws against rape.

Judge Yogesh Khanna said the case fell in the “rarest of rare category”, rejecting pleas for a lighter sentence.

The woman, 23, was attacked on a bus in December and died two weeks later.

On Friday, Judge Khanna said the attack “shocked the collective conscience” of India, and that “courts cannot turn a blind eye” to such crimes.

“This case definitely falls in the rarest of rare categories and warrants the exemplary punishment of death,” he added.

The men were convicted to death by hanging, and one of them, Vinay Sharma, broke down in tears as the verdict was announced.

The father of the victim, who cannot be named for legal reasons, said the family was satisfied with the ruling.

“We are very happy. Justice has been delivered,” he said in the courtroom, according to the Associated Press news agency.

Earlier, protesters outside the court had demanded that the four men should be hanged.

As they were escorted to the courtroom, the four men shouted to the crowd: “Brothers, save us!”

They all deny the charges and can still appeal against the verdict to the Supreme Court and also ask the president for clemency – a process that could take years.

The defence lawyers argued during the trial that their clients had been tortured and some of their confessions – later retracted – had been coerced.

There was unprecedented police security in Delhi on Friday.

The road to the court was barricaded by police, and inside riot police took up positions as the lawyers were escorted in, the BBC’s Sanjoy Majumder in the Indian capital reports.

In August, a teenager who was found guilty of taking part in the rape was sentenced to three years in a reform facility, the maximum term possible because the crime was committed when he was 17. He also denied all the charges.

Another suspect, Ram Singh, was found dead in his cell in March. Prison officials said they believed he hanged himself but his family allege he was murdered.

The December attack sparked a national debate on the treatment of women.

Tough new laws were introduced in March which allowed the death penalty – carried out very rarely in India – to be handed down in the most serious cases of rape.

Reacting to Friday’s verdict, human rights groups said the death penalties would not end violence against women in India and that far-reaching reforms were needed to tackle the endemic problem.

“Sending these four men to the gallows will accomplish nothing except short-term revenge,” said Tara Rao, Director of Amnesty International India.

“While the widespread anger over this case is understandable, authorities must avoid using the death penalty as a ‘quick-fix’ solution.”

Meanwhile, Human Rights Watch’s South Asia director Meenakshi Ganguly told the BBC: “The punishment of perpetrators is important but equally working together as a society to keep women safe is much, much more important.”

Today is International Day of Nonviolence