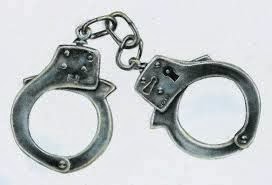 Five men have been arrested by the Ogun State Police Command for allegedly gang raping a 33-year-old female trader in Ogun State. The perpetrators aged within 23-28, initially intended to kidnap the victim in return for a ransom, but robbed and raped her instead after she said she is an orphan.  The victim was dispossessed of a huge sum of money and her personal possessions worth thousands of naira. Read more…
Nigerian Eye reports:

The alleged rapists also robbed their victim of N1.8m cash and dispossessed her of other items worth over N387, 000 last Tuesday.

The suspects according to the Police Public Relations Officer of the command, Olumuyiwa Adejobi, are “Opeyemi Abisola, 28, of no fixed address; Nnamdi Sunday, 24, of new Ilaro Road, Papalanto; Olatunji Awe, 24, of Babs Ayorinde Orija Estate, Abule Iroko; Sunday Fayomi, 23, of Abule Ododo and Michael Sunday, 23, of Abule Ododo all in Ogun State while two others are still at large. ”

Adejobi, a deputy superintendent of police, said in a statement, “The victim, who had left Lagos for Idiroko on that day was taken to an unknown destination at Olodo Village, where the hoodlums beat her up thoroughly and raped her, having taken a cash sum of N1,803,000; gold, worth N200,000; wrist watch worth N500,000 and mobile/ blackberry phones, all valued at N2,187,500 only from her. All these exhibits have been recovered from the suspects.”

The PPRO added, “The Anti Robbery Team, led by Sergeant Adebayo Oyesomi, attached to the command’s State Criminal Investigation Department, Eleweran, Abeokuta, while on normal routine patrol along Obada/Ewekoro/Ifo/Sango road sighted the victim by the road side at Papalanto junction in Ogun State on Monday January 27 at 20.00hrs, after her release by the armed robbers and interrogated her.

“She narrated her ordeals in the hands of the hoodlums and volunteered to assist the police to apprehend the suspected armed robbers. The police team later arrested five of the men at Olodo area after a rigorous search the following day, Tuesday.

“According to the victim, the suspects had wanted to kidnap her when they were asking her of relatives who are buoyant enough to drop ransom for her release but said she kept on begging them that she is an orphan, who struggles to survive with her business.”