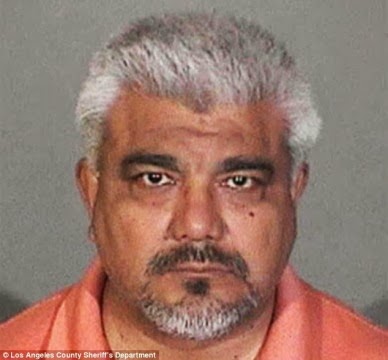 A California associate pastor has been accused of sexually assaulting several of his parishioners with his ‘healing hands.’

Juan Jorge Castro, 53, of Norwalk, CA., was arrested last Friday for the alleged assault of at least four parishioners, but is suspected of violating upwards of 20.
The allegations include repeated abuse of the victims and accusations he used their undocumented immigration status against them.

Mr Castro has been formally charged for assaulting only four women, as the other 16 have refused to discuss the crimes with investigators.

The alleged pervert is said by investigators to have told women who came to him for counseling that the sex acts were part of the faith-healing process,’ a Los Angeles County Sheriff’s Office spokesperson told local media.

‘He claimed to have healing hands and utilized that process to eventually sexually assault them,’ the spokesperson said.

‘[Mr Castro] would perform certain acts with them in the name of God,’ a spokesperson told KCAL

Aged 18 to 39, Mr Castro’s victims were all undocumented immigrants, which the accused man used to blackmail them into silence.

‘He did this by invoking fear by threatening to tell the victims if they reported him he would have the victims deported,’ a sheriff’s office spokesperson intimated.

The allegedly corrupt counselor also threatened to embarrass his victims in front of the congregation.

‘He preyed upon them from a trust position. He warned them they’d be the subject of ridicule in the church if they told others,’ the spokesperson revealed.

The crimes are alleged to have taken place beginning in 2004, shortly after Mr Castro moved to Los Angeles from Argentina, according to reports.. They took place both on church grounds and in victims’ homes.

Investigators are promising any women wishing to come forward that they will overlook the victims’ immigration status and take no adverse action against them if they come forward, they told local media.

Officials also believe there may be more victims and are urging all women victimized by Mr Castro to come forward and tell their story.

The supposed scoundrel has been charged with multiple counts of rape, penetration by foreign object and oral copulation, but investigators told local media they expect more charges to come.

He is being held in Los Angeles County jail on $2million bail.

Will Boys Always be Boys??? (The Gillette Saga)