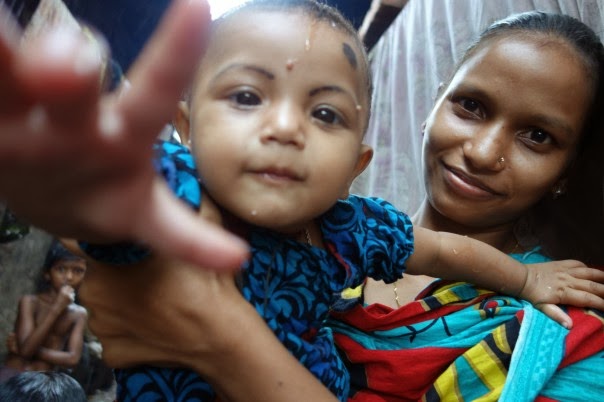 Bakul is determined her daughter will be able to make informed decisions.

Bakul is a typical 17-year-old girl. She likes music and movies and is an avid follower of soap operas. She has chores to do during the day and dreams of becoming a doctor. She lives in a small, sparsely decorated room in one of the poorest parts of Dhaka, capital of Bangladesh, but, to all intents and purposes, she’s a teenager with the same aspirations as her peers around the world. For Bakul though, there’s one big difference: two years ago she got married; eight months ago she gave birth to a daughter.

Wrapped in a red and blue sari, Bakul’s youthful appearance reveals none of the hardship she’s had to endure since her marriage, the circumstances of which were anything but conventional.

Bakul met a young man, Rony, four years older than her, and they started dating. Before long, Rony’s friends and relatives were putting enormous pressure on Bakul to marry because Rony is an orphan and in Bangladesh, a mostly Muslim country, there is a belief that orphans should be helped whenever possible.

“They said he’d commit suicide if I didn’t run away with him,” says Bakul, sitting with her daughter, Jui, fidgeting in her arms. Her room is dark but tidy, with few possessions other than a collection of neatly stacked saris and toys scattered across the floor. A rickety ceiling fan whirs above as Bakul recalls her story.

There was huge pressure on Bakul – the couple were urged to run away for a time so that her parents would be shamed into accepting the marriage proposal for fear of enduring a scandal.

Early marriage is nothing new to this family, however. Nashima, Bakul’s mother, was married at 13 and gave birth to Bakul at 16.

“I was so young and I didn’t know my husband, so I was afraid of him. I didn’t know what it meant to have a husband,” says Nashima.

For girls like Bakul, it’s a difficult transition from carefree schoolgirl to wife and mother, says Tanushree Soni, gender specialist in Asia for Plan International, a global children’s development organisation.

Married girls also tend to drop out of school as it’s believed that the primary responsibility for girls is to take care of their family and there’s no longer a need for education. Bakul hasn’t been to school since she got married.

“I have some friends who are going to college now and I feel bad that I can’t go with them,” she says. “I used to really enjoy my school life. My teacher used to call me a ‘singing bird’ because I would always sing and dance.”

Bakul knows now that her options are limited. While her mother could potentially take care of Jui during school hours, married life doesn’t come cheap and neither her husband nor her parents has enough money to pay for her schooling. Rony tries to make ends meet by ferrying people around Dhaka as a rickshaw driver, making up to 400 taka (${esc.dollar}{esc.dollar}US5) a day, but he rarely works a full day, says Bakul.

“He spends more than he earns, and usually doesn’t give me money. Most of our money goes on food,” says Bakul as her eyes well up and she starts to sob. “I really regret getting married so young. I had so much freedom before and didn’t have to care about my family and responsibilities. My parents often remind me that this is what I have done to myself.”

Education is pivotal in the fight against child marriage. When girls go to school, it means they marry and have children later and have a much higher chance of being able to find work and take full control of their lives, adds Soni from Plan.

Instead of going to school, Bakul’s daily routine is focused on her daughter first and foremost, then her husband and her family.

“I get up at 5 am for morning prayer. I start cooking and go to fetch water from the tube well nearby. I look after the baby and make food and then think about what food to make for lunch. By 7 pm I try to finish all of my cooking and household chores and then watch TV and watch soap operas.”

Bakul’s eyes light up when she talks about soap operas. For many married girls, opportunities to get out of the house and interact with others from their own age group are few and far between. Soap operas present a welcome release.

“One show I watch is Tapur Tupur. It’s the story of two sisters. I aspire to be like Tupur, she’s the good one, the responsible wife and daughter-in-law who helps everyone when they are in a bad situation.”

Daily responsibilities
Food is normally served to husbands by their wives, but with so many chores and tasks to do during the day, Bakul’s husband often has to serve himself.

“I have to look after him as well, give him his food. He often nags, especially when he’s angry,” she says.

Both Bakul and her mother, Nashima, are clear on their hopes for baby Jui.

“When she’s 18 she’ll be mature enough to understand the depths of relationships and her responsibilities to her household, her husband,” says Nashima. “When you get married young, you don’t understand those things.”

Bakul, however, says even 18 is too young.

“If I met another girl who was thinking of getting married like I did, I’d try and discourage her. It’s like if you want to buy a nice dress, maybe your husband won’t be able to buy it for you, but if you study and get a good job, then you can buy it for yourself.”

Jui’s future prospects offer more hope than those of her mum and grandma. In the slum where they live, home to about 10,000 families, a Community Development Forum works with Plan International and a handful of local NGOs as part of a Child Protection Group. Set up in 2005, members of the group hold events to raise awareness of important issues and try and intervene whenever they hear about a child marriage.

“Just a month ago we heard about a girl in grade 8 who was due to be married, so we went to the family’s house and convinced the parents to put the wedding off until she is at least 18,” says Joynal Abedin, a member of the group.

As one of the poorest, and most densely populated, countries in the world, it can be difficult to overcome the root cause of child marriage: poverty. Poor families often sell their children into marriage. Unlike sons, daughters are considered to be a burden since after marriage they are their in-law’s and husband’s responsibility, adds Soni.

For Bakul, a girl who’s been forced to become a woman early, there is hope for the future, as married girls are increasingly finding the information and support they need to lead healthy, empowered lives. With Jui, there’s also an opportunity to buck a trend.

“If I could start my life again, there’s no way I’d get married so young. I’d stand on my own two feet, become independent, have good health, be with my family and friends.”

It’s High Time We Talk About Sex to Children