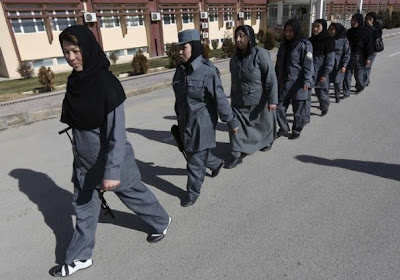 An international charity, Oxfam suggests that Afghanistan needs more female police officers if it wants to tackle rampant violence against women effectively. This could also apply to Nigeria, as we need educated female police officers, who rape survivors can report to and can also carry out intensive investigation.

Despite government initiatives over the past decade for the Afghan National Police (ANP) to recruit women – after the lifting of the Taliban ban on women police – only 1 percent of the ANP is female, Oxfam said in a new report.

“Afghan women need Afghan policewomen to protect them,” said Elizabeth Cameron, policy and advocacy adviser at Oxfam. “Violence against women is endemic but without female police officers, Afghan women are reluctant to report crimes and get the justice they desperately need.”

There were some 6,000 reported cases of violence against women in 2012 in Afghanistan, up 25 percent from 2011, according to the Afghan Independent Human Rights Commission (AIHRC).

This figure is likely to represent the ‘tip of the iceberg’ as most cases go unreported because the victims fear more abuse by the perpetrators or, in some cases, by the ANP itself, Oxfam said. The AIHRC found the ANP responsible for nearly 15 percent of the honour killings and sexual assaults recorded between 2011 and 2012.

A 2008 survey cited in the report said 87 percent of Afghan women had been victims of some form of physical, sexual or psychological abuse.

Afghan women joining or staying in the police force face many challenges, despite being allocated 3,000 ANP positions – fewer than half of which have been filled.

These challenges include the reluctance of male police chiefs to accept female recruits, the lack of basic equipment such as uniforms, the discrimination and abuse female officers face from both their male counterparts and their communities, which often regard policing as an inappropriate job for a woman.

A 2012 survey backed by the United Nations found there was growing public acceptance of female police officers among Afghans, and that policewomen were more trusted to solve a crime than men, Oxfam said.

“Recruiting more women to the ANP can become an effective means of reducing excessive use of force and citizen complaints,” Oxfam quoted the head of the European Union Police Mission in Afghanistan (EUPOL) as saying.

“Within the context of community policing, having female police in the ANP will result in a better relationship with the local population. This in turn helps fighting crime and raises the acceptance of the police, and thus state authority.”

Oxfam called on the Afghan government and the international community to prioritise the recruitment and training of policewomen as this would not only help combat violence against women but would also play an important role in Afghanistan’s peaceful transition when international troops pull out of the country next year.

“The clock is ticking for Afghanistan as we approach 2014. The gains we have seen in women’s rights over the years are in serious jeopardy if the rule of law and the role of the Afghan police force are not improved,” Cameron said. “Afghan policewomen should be doing more than making tea. Effective policewomen, safe in their jobs, are a critical factor in sustaining change for the better.”

Volunteer Of The Month (May)