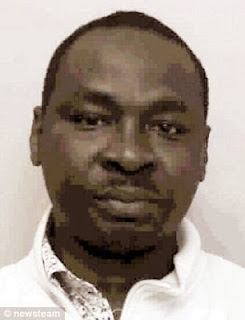 Why do Nigerians do this to our dear country? So apparently, a Nigerian man has been jailed in London for rape. Read more….
Idreez Popoola (pictured above), a night club bouncer has been jailed for seven years in the UK for raping a woman in her own home. Idreez, who twice dodged deportation, brutally attacked his victim on 29th December 2012, eleven months after he successful appealed his deportation ruling.

Prosecutors said Popoola met his victim while working as an agency-employed bouncer outside Bar So in Northampton town centre. He took her out for drinks then managed to convince the woman to take him back to her home. It was in her home that he attacked her.

Popoola, 34, was jailed for seven years at a court in Northampton on October 18. He was also ordered to sign the Sex Offenders’ Register for life. The court told him he would be automatically deported back to Nigeria on his release from prison.