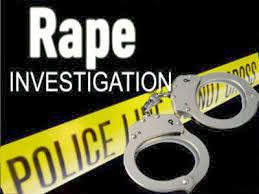 The amount of rape cases in  Nigeria is alarming! It has become something I read about daily and I wonder, why? The ineffectiveness of the justice system is now propelling men to think they can just rape anyhow abi???

News reaching us from the Punch is that, a 35-year-old prophet, Favour Emmanuel, on Monday appeared before an Ojokoro Magistrates’ Court, Lagos, over an allegation that he attempted to rape a female worshipper “Anna.”
Emmanuel, who resides on Adedokun Street, Baruwa, Ipaja, was arraigned on four-count charge of attempted rape, undressing without consent, breach of peace and provocation.

The prosecutor, Inspector Clara Olagbayi, told the court that the offences were committed at the accused office in Baruwa, Ipaja, on October 21, 2013.

Olagbayi said the complainant went to the prophet for prayer, but the accused assaulted her by undressing her and was about raping her when she cried out for help.

The prosecutor said it was the screaming of the complainant that attracted the neighbours, who rescued her and reported the incident to the police.

The Magistrate, Mrs. A.O Layinka, granted bail to the accused in the sum of N500, 000 with two sureties in the like sum.