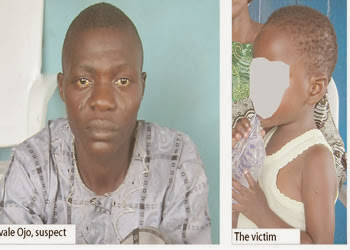 Yes people, I have come again with another heartbreaking story. Sometimes, it really gets depressing to imagine what these young girls might have gone through during a rape. This is just a case of covetousness. After two wives, what else could a man possibly want? I really need your views on this one. Read more…

A 34-year-old commercial driver, Olawale Ojo, living in Oyo state has been arrested by the Oyo Police Command for defiling his neighbour’s two-year-old daughter.

According to the mother of the baby, a herbal drinks seller at a motor park where her husband also parked his vehicle, the baby was left with the husband who left her unattended whilst the suspect invaded their home to commit the atrocity.

She recounted, “I had to take her home that day because of an impending rain. My husband later came back to say the girl was asleep at home, and that he had asked a neighbour to keep an eye on her while he went to buy the girl something to eat.

“The suspect even came to me at the motor park and was there when my husband was telling me about our daughter. On getting home, I entered through the back door and as I opened the door of our room, I met my girl with her thighs open on the bed, staring at something behind the door. On checking what might have attracted her so much, I was shocked to find Ojo covering behind the door.

“When I asked him what he was doing in our room, he said he wanted to give me a video disc I asked for earlier. My daughter started vomiting and when I went to look at her, I saw that he had ejaculated around her private part. It was my noise that woke our neighbours. When we got to the hospital to confirm her medical status, the report indicated that the little girl had indeed been defiled.”

The father of the child said, “The man is not a friend of mine, though we operate at the same motor park at Ojoo, so I was wondering why he should enter my house. I immediately called the police and he was arrested.”

Speaking to journalists, the suspect said, When I got there, l met the girl crying and I carried her and put on the TV for her so that she could watch it,” he said. Ojo later confessed to have defiled the girl and claimed that he did not know what led him to it. He later blamed it on devil, saying “I don’t even understand how it happened.”

Ojo said he is married to two wives and had four children.