#Nigeria! Man and 7 Friends Take Turns in Raping Lover After She Dumped Him

#Nigeria! Man and 7 Friends Take Turns in Raping Lover After She Dumped Him 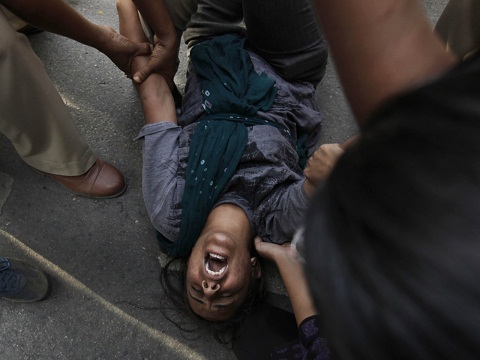 The police have arrested a jilted man for allegedly conspiring with seven other men to gang-rape his estranged lover, a 28-year-old woman (name withheld) in Lagos State, southwest Nigeria.

The man was identified as Stephen Obi. He was charged with conspiracy and rape before Ejigbo Magistrate’s court, while seven of his accomplices are still on the run. Some of the seven men on the run are still threatening to kill the lady if she continues to pursue the matter.

On the day the lady was allegedly gang-raped, Obi reportedly invited her to Baba Olopa Street, Adexson, in Igando to settle their differences. She obliged him and went. She said when she entered his room, seven of his friends came in and they locked the room and started beating her and asked her to strip.

Obi said they cut her finger with blade and used a white handkerchief to clean the blood that came out and told her she was under oath with them. She said they told her that she would die if she revealed what happened to anybody.

According to her, “Obi then brought out condoms and gave them to the seven men who started raping me in turns.” She said after they were satisfied, they allowed her to go.

On getting home, she said she told her father what happened and they went to Igando Police Division and reported the matter and Obi was arrested and charged in court. But the other seven men escaped before they could be arrested. She said she was still shocked over what they did to her and that they are still calling her phone threatening to kill her if she continues with her legal actions.

When the matter came up on Wednesday, Obi pleaded not guilty to the two-count charge preferred against him.

The prosecutor, Mr Nicholas Atumonye, presented the doctor’s report before the court which indicated that the victim was sexually abused.

The presiding Magistrate, Mr M.B. Folami said after going through the doctor’s report that Obi should be remanded in prison custody at Kirikiri.

The next mention of the case will be on September 23 this year.

This is the time to #EndSexualViolence against women! It is brutal!
Ladies please beware, your safety is my concern!

The Paradox of Rape Laws In Nigeria