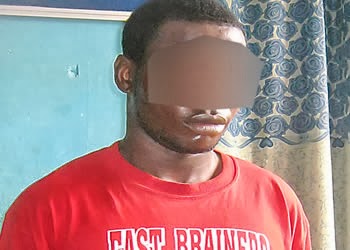 A 28-year-old okada rider, Mr Tope Daisi, currently being held by the police in Oyo State over the alleged defilement of a five-year-old girl, was said to have offered the girl N5 which the girl used to buy sweet after the act!

This was revealed to Crime Reports during an interview with the victim, “Sekinat” after the suspect was arrested by detectives from Eleyele police station.  It was learnt that though the act was committed on Tuesday, August 27, Seki’s grandmother, Madam Khadijat Kolapo went to the police station on Wednesday, August 28 and narrated how her neighbour, Daisi, lured her granddaughter to his room when she went out and left the girl at home.

The elderly woman further alleged that the man stripped the girl of her cloth and defiled her, after which he gave her N5 and warned her to keep sealed lips.
However, the little girl could not keep the experience and the money she earned from her seven-year-old cousin, Afusat (not real name), as she told her that Brother Tope did ashewo (prostituted with) to her.

Immediately their grandmother returned home, Afusat told her what happened and said that they had already used the money to buy sweet.

The Divisional Police officer in charge of the station, Olawole Ayoola, a Deputy Superintendent of Police, reportedly ordered the suspect’s arrest but when interviewed, he denied the allegation, though he could not explain why he was the one pointed at among other men in the neighbourhood.

When the girl was taken to a hospital for medical examination, Crime Reports learnt that the report indicated bruises in the vaginal area though the hymen was still intact.

Narrating her experience to Crime Reports in her childish voice, Sekinat said:
“I was outside and he (Daisi) came to take from our house to his room. He spread a mat on the floor, removed my pants and his trousers. He lay on me, held the thing that is used to urinate and put it in my private part. After he finished, he warned me not to tell anybody. He then gave me N5 and I used it to buy sweet.”
In an interview, the Ijebu-Ode-born suspect who disclosed that he was also a footballer, said he was surprised that the girl pointed at him.
According to him:

On the fateful day, I was at Eleyele area of the city where I normally go around 5a.m. to issue tickets to okada riders. My football club also had a match at Olubadan Stadium by 2pm. We were told to report by 1.30p.m. So, at noon, I went home on my bike to prepare. As I was coming, I saw some children playing with sand and one of them ran across, in front of the bike. I stopped and beat her but some bystanders said I should thank God that I didn’t hit the girl. I went home to have a shower and left for the stadium. In the evening, I went back to okada park and returned home around 9pm.

I was surprised when the girl’s grandmother came to me on Wednesday, August 28 and held on to my shirt, saying that her granddaughter informed her that I took her in, removed her pants and put myorgan in her private parts. I told her it was not true but she did not listen.”The grandmother told Crime Reports she took over the care of the little girl because her mother became bedridden as a result of stroke she suffered.

The state’s Police Public Relations Officer, Olabisi Okuwobi-Ilobanafor, confirmed the story to Crime Reports, stating that the suspect had been transferred to the State Criminal Investigation Department, Iyaganku, for further investigation.

Injustice! Pastor Who Claimed He Raped Teenage Boys to Keep Them “Sexually Pure” Will Not Serve Jail Time

India has 40% of world’s child brides, The Times of India