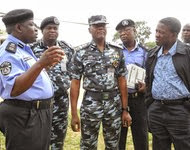 When I said some victims commit suicide after a rape incident, people thought I was going over the board. Well, this is to clarify your doubts. This is the more reason we are passionate to keep on fighting. Those who raped this girl will be alive chilling somewhere, while the poor innocent child is gone. We must #EndRape! Read more…

According to Vanguard News, an 18-year-old girl, allegedly gang-raped by three boys, has committed suicide at her Amarata residence. It is a suburb of Yenagoa, the Bayelsa State capital.
The deceased, simply identified as Janet, was a native of Oduali in Abua/Odua Local Government Area of Rivers State.

She was reportedly gang-raped at gunpoint by the boys, who forced her into an uncompleted building last week, while she was on an errand for her elder sister.
A source said: “The girl was sad and devastated after the incident. After she narrated her experience, her sister’s husband, who is a pastor, asked her to describe any of her attackers. She described one of them.
“The boy was traced to his house, but he had absconded. The pastor counselled her and promised to pursue the matter to a logical conclusion.”
It was gathered that, unknown to her guardian, the distraught girl had decided to take her own life.
The source said the rape victim left behind a suicide note, after which she took a poisonous substance known as Sniper.
She was discovered groaning in pain, and taken to GlorylandHospital, where she died.
The state Police Public Relations Officer, Mr. Alex Akhigbe, confirmed the incident. He said the Police has launched investigation into the alleged rape charges filed by the girl’s family.
0 Likes