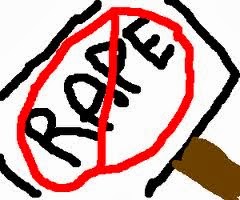 What is going on with our country #Nigeria? When did it become a norm for men to rape their own daughters? Is this a curse or is it something that some men now derive pleasure in? It’s bad enough to rape, but ones’ own daughter??? Read more…
A 36-year-old man identified as Aminu Ajao, was arraigned on Monday, January 20th 2014 before an Ebute Meta magistrate court for allegedly raping his 14-year-old daughter. The girl, a primary school student, reportedly got pregnant for her father as a result of the rape.
According to the Police, the incident happened on Wale Azeez Street, Ajasa, Lagos State.
Punch reports:
The magistrate, Ms S.O Solebo, called the victim’s mother and her stepmother to court to give an account of how the event unfolded.
The victim’s mother, who did not disclose her name in court, said she had separated from Ajao and had remarried.
She said, “After our separation, I took my daughter to live with my mother.  But in October, 2013, he went to my mother’s house and took her from there.

“It was from that time that he started pressuring the girl before sleeping with her and impregnating her.”

Ajao’s new wife, who was nursing a baby, said she was not aware of the incident until the matter got to the police.
“It was in October last year that he brought the girl to be staying with us. While I slept in the room, she stayed in the parlour and I didn’t know anything was going on,” she said.
The magistrate became angry when the victim’s mother told the court she had taken her daughter back to the grandmother, adding, “My sisters will take care of her ante-natal.”
Solebo said, “You sound so irresponsible. She is your own child and you are saying your sisters will take her for ante-natal care at her grandmother’s place. If they had exercised due diligence and care, maybe she would not have been taken away by her father.”
The magistrate thereafter called the Office of the Public Defender for custody of the girl.
“She is 14 and she is pregnant. Her body is not developed to carry the pregnancy. I am very interested in how the girl fares,” she added.
The police prosecutor, Inspector Richard Odige told the court that the crime was punishable under sections 135(1)(2) and 137 of the Criminal Law of Lagos State, Nigeria, 2011.
Odige thereafter applied that the matter be transferred to the Directorate of Public Prosecution for legal advice.
However, the defence counsel, Ola Ogunbiyi, pleaded with the court to admit Ajao to bail in liberal terms.
Ogunbiyi said Ajao had emaciated because he had been in detention for a long time.
Reacting, Solebo said, “The punishment for the offence is life imprisonment. Already, a medical report from the Lagos State University Teaching Hospital has indicated that she was pregnant as of November, 2013. The police, who investigated the matter said she was pregnant for her father. So, what do you want me to do?
0 Likes

#BlogPost: She seduced me by Abimbola Abiola (@AbimbolaAbiolaa)