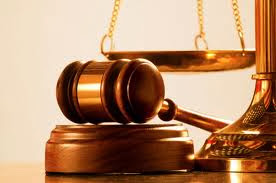 Vanguard Newspaper  reports that 19-year-old Usman Joshua, has been arrested by the police in Ado-Ekiti for allegedly defiling a three-year-old girl. (names withheld).

Joshua, who is a co-tenant with the toddler’s parents, was said to have lured her into his room with biscuit at about 5:05 p.m. on November 3, 2013.

Her mother, Wuraola, said she noticed that her daughter was not feeling comfortable when she returned to their apartment by evening of the said day.

A closer look by her mother showed that the little girl had been defiled. She told her mother that she was playing within the compound when Joshua told her to come for biscuit.

As a neighbour, the unsuspecting girl followed him into his apartment.

She said: “This man called me and asked me to come and collect biscuit in his room. He took off my dress after placing me on his laps. He took off his own clothes too and slept on top of me.”

In her account, Wuraola said: “ On November 3 at about 5:05 p.m., I saw my daughter outside with her pant almost falling off her waist. I rushed down to meet her and discovered that someone poured sperm all over her body. I asked where she was coming from and she said it was one daddy that took her to his room.

“She said that he slept on top of her after giving her some biscuits. She took me to the room where the man was. I called my landlady and we questioned him. He confessed to have committed the crime.”

She later reported the incident to the police.

Joshua in his own account said: “I am a co-tenant. The girl followed me inside my room and started playing with me. She climbed upon my chest and played with my private part.

“When I got an erection, I could no longer control myself. I removed her pant and inserted my penis in between her laps. I could not penetrate but I released sperm on her and let her go. That was my first time with her. I have never done such a thing with a girl of her age. I don’t know the kind of spirit that came over me”.

However, the Police Public Relations Officer, Ekiti State Police Command, Mr. Victor Babayemi (ASP), said: “Based on our investigation, Joshua had sex with the infant. He was aware of her age but took advantage of her.”