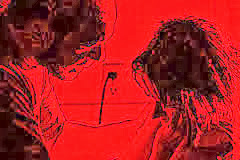 A woman, Patience Godwin (29), who allegedly recruits the girls for Sankary, was also arrested. A source said a 14-year-old girl was found in Sankary’s odopetu home by the police. Patience confessed to the crime, saying she had taken 12-year-old girls to Sankary many times in exchange for money.
Over 86 minors were said to have fallen victim to the suspects.
Police spokesman Wole Ogodo said Sankary said he did not force the girls to
be intimate with him.

A fellow Nigerian woman, selling out little girls to a sick pedophile all for monetary kick backs, and we keep pretending there is no problem? This matter is aggravating daily and the more we are quiet about it, the more harm we are doing to our future generations.

It could be your daughter next…
Thanks to Arome Ameh for sharing this.
0 Likes