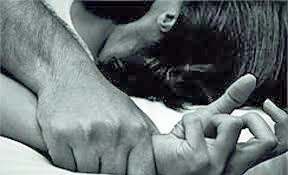 This will definitely shock you peeps. The police (making us proud right now) has apprehended the culprits who raped a 12 YO girl to death. The victim was once declared missing by her parents, was raped to her untimely death by some heartless men you will read about shortly. One of the suspects actually lured the deceased to his house, raped her and dumped her remains in a well. How wicked human beings are! Read more below and also see photos…

The Police in Imo State, recently, rounded up the brain behind the death of a 12-year-old girl, Ifunanya Favour Iberi, who was declared wanted two months ago by arresting a 34-year-old man identified as Samuel Chukwunyere. Police alleged that the suspect was responsible for raping the teenager to death and dumping her lifeless body in a deep well.

The missing little Ifunanya was last seen by members of her family on Sunday, October 13, 2013, when she could not return to their house after her day’s routine activities. Apparently worried by the scaring development, her parents immediately alerted the Imo State Police Command. Their passionate appeal to the Commissioner of Police, Katsina was very simple. ‘You must please, assist us find our missing daughter.’

Seeing the depth of grief boldly written on the faces of Ifunanya’s parents, the Imo State police boss assured them of his determination to get to the root of the matter.

Katsina mobilized his men and went after the fleeing criminal. Not long after, a 34-year-old artisan from Amaenyi, Nkwerre, Chukwunyere, who lives at Umulolo village, where the missing girl hailed from, was apprehended. This man quickly fled the community when he noticed that he was being linked with the sudden disappearance of little Ifunanya. The suspect was rounded up few days ago by the police when he quietly returned to the village.

In an interview with Crime Alert, the suspect confessed that he actually lured the innocent victim to his house and raped her to death. He also disclosed that he lured the girl to his place because he told her that he bought her a phone, adding as soon as they got to his house and on noticing that the place was lonely, he quickly grabbed the young girl.

The suspect also explained how he dumped the remains of his young victim inside a deep pit near his residence to avoid being traced by anybody. ‘I now asked myself how will I manage to hide the corpse of this girl. I now rock my brain and rock my brain and the shovel that I have there cannot dig the ground. This ground sef na stone ground. I cannot dig it alone. I now searched around my place here and I saw that pit there (pointing to the location of the pit) and I now say let me come and put her inside that pit, so that the place will be enough to hide it. Nobody will know. I now rolled her with some cloths. After 12 to one o’clock in the midnight, I now brought her to this place and now throw her inside the pit.’

He also confessed that this was not his first rape case, especially as Crime Alert gathered that several girls in the area had previously fallen victim to his nefarious act.

The State Police boss later took Crime Alert to the scene of crime where the skull of the little girl which was already severed from her body and other decomposing parts believed to be her remains were lifted from the pit, which contained greenish water.

Speaking to Crime Alert at the scene of the crime, the State Police boss explained that after committing the alleged sordid crime, the suspect threw the lifeless body of the young girl into a nearby well and vowed to bring him to book.

‘His arrest and subsequent interrogation encouraged detectives to move to this place where this very horrendous spectacle was again discovered. It is a clear case of sunset at dawn. She may have gone but her soul is seriously crying for justice and this is what I will surely do,’ Katsina promised.

Continuing, the Imo police boss said that apart from this sordid incident, investigations also revealed that ‘this very suspect is a serial killer, serial rapist and is responsible for the missing and death of many of our young girls, not only in Imo State but in some parts of the country.’

While describing the suspect as “an unrepentant killer,” the CP also said that ‘the man has been involved in many reported cases of ritual-related murders since 2004 till the time he was arrested. Investigations into the matter is on-going to unmask all those behind the dastardly act. I am hoping that pathologists will equally ascertain the real cause of the death of the innocent girl.’

How suspect was arrested
He recalled that the police had painstakingly been on his trail for about two months since little Ifunanya was reported missing by her parents. Giving a graphic account of how the suspect was eventually apprehended, the CP explained that soon after the girl was reported missing, the suspect quietly escaped to Aba, Abia State.

‘He later sneaked into Nkwerre when he thought that the search for the missing girl had died down. He was, however, wrong because the Ambush Squad of the Command quickly arrested him on getting wind of his return to base.

It is sad to note how people can be very heartless. On noticing that the innocent girl had died in the process of raping her, the suspect carefully but shamelessly threw her remains into a nearby pit.’