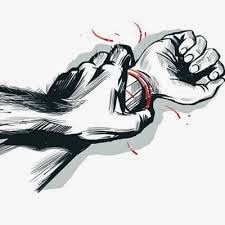 Not again! Why is rape making the headline news everyday? Are we missing something out? Just today, report has it that a 23-year-old boy allegedly raped a minor to death in Bayelsa. The alleged rapist ran away when he noticed the girl was dead, but amazingly handed himself to the police. Strange right? Read more on the report below.

A 23-year-old boy yesterday allegedly raped a 16-year-old girl to death in Oporoma community in Southern Ijaw Local Government Area of Bayelsa State.
It was gathered that the deceased visited the alleged rapist in company of her friend, where they were offered drinks containing substances suspected to be cocaine. Daily Trust learnt that while the deceased accepted the offer, her friend declined, and later left the room. Sources said after the deceased’s friend left the room, the suspect raped the victim until she became unconsciousThe alleged rapist, it was gathered, ran away when he noticed that the girl had died and that a mob was after him. Sources said he later handed himself to the police.
The state Police Public Relations Officer Mr. Alex Akhigbe, confirmed the incident and added that the command is awaiting the outcome of the autopsy on the deceased.He confirmed that the suspected rapist entertained the deceased with alcohol before the rape.He however added that until an autopsy is carried out, the police cannot ascertain the cause of death.