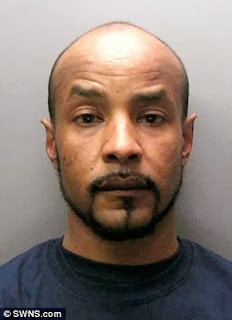 Apparently jealousy prompt some men to rape or commit murder. Well in this guy’s case after seeing his girlfriend with another man, he just wanted to revenge by raping another woman. Unluckily for him for, his manhood failed him, he just couldn’t rape the women. Here is why…

According to IReporters, after seeing his girlfriend with another man, Sudan-born Khalid Abdullah cornered a stranger in an alley and held a blade to her neck in a jealousy fuelled assault.

Khalid told the woman, in her 30s, that he ‘needed s*x’ before putting his hand over her mouth and telling her to keep quiet.

However, Abdullah, 35, was unable to carry out the rape and told her: ‘It’s my first time, I’m sorry.’

The lady fled but Abdullah caught her and told her he ‘wanted to kill all women’ after catching his girlfriend being unfaithful.

She managed to reach her home in Peterborough, and raised the alarm. Abdullah was later identified through CCTV.

After a week-long trial at Peterborough Crown Court, he was convicted of attempted rape.

Judge Nic Madge jailed him for eight years and described the attack as ‘every woman’s worst nightmare’.

‘Whether due to the amount you had drunk or for some other reason, you were not successful in having s*xual intercourse, clearly that was your intention,” the judge told him.

‘You did not succeed in penetrating her and she did not suffer any physical injuries, but this was an absolutely terrifying experience.

‘It is every woman’s worst nightmare. The victim was terrified because of your anger and unpredictability.’

‘Abdullah is clearly a dangerous individual and we are pleased he is now behind bars for a significant period of time,’ detective Constable Louise Spinks said.