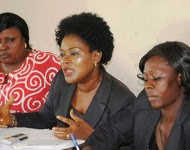 We totally agree with the Chairperson, International Federation of Women Lawyers, Bayelsa chapter, Mrs Pere Egbuson, who has urged rape victims to reject-out-of court settlement. We believe that out-of-court settlement is not only doing rape survivors no justice, it buys their voice.

Egbuson made the call in an interview with the News Agency of Nigeria in Yenagoa.

She said out-of-court settlement of rape cases was counter-productive and against the global efforts to check sexual abuses of women and minors.

“In pursuing rape cases, accepting out-of-court settlement will give room for would be offenders to continue to commit the crime against children and women in the society,’’ Egbuson said.

The FIDA chairperson said rape cases had been on the increase and expressed regrets that many victims were reluctant to prosecute the matter in court, due to fear of stigmatisation.