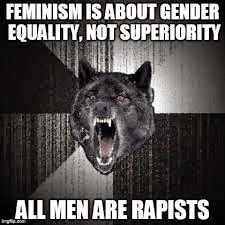 There has been a couple of derogatory messages with regards to our article titled “Every Man Is a Rapist If…” (read HERE). This a follow-up article to clear things and ensure we are not misunderstood.
Recently I’ve been bombarded with some ill conceived notion/comments as regards my article on “Every man is a rapist if…” In the second paragraph I wrote that “we do not want our male readers to get the wrong idea that we’re declaring every man a rapist. By careful reading I expect readers to understand the message in it also that I mean no harm and yes that I’m a feminist doesn’t mean I’m man-hating. Feminism has to do about equal rights for women and men not hate on men.
I want to clarify that “Every man is a rapist If…” is not the same thing as “Every man is a rapist.” It doesn’t mean that every man would rape if given the chance nor every man wants to rape. What it means is that a rapist do not have marks or visible signs on his foreheads to identify him as one. It means that even people within a victim circle of trust and friendship can be the very person who rapes her.

I am not accusing every man of being immoral and anti-social because I do know that many men are raped too. What it means is that perpetrators are like any one of us, they prowl in every age and size. He may be living close by, hanging out with you while plotting on how to violate someone in the evening. He may be anybody; the security guard at the gate post, the driver, a family member and even a close pal. However, 80% of victims know their attacker, for this it becomes impossible to distinguish men who are safe from those who are dangerous, men who can be trusted from men who can’t and then men who will rape from men who won’t.

In all, I would never call “every man a rapist” because there are lots of men doing good and who have joined hands with women by challenging rape attitudes and behaviours and raising awareness about the damaging impact of sexual violence. I end on this note, every time a man’s voice joins those of women in speaking out against rape, the world gradually becomes safe.