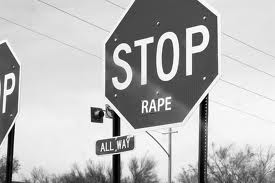 The issue of sexual violence against women and girls is long overdue. The amount of unimaginable cases of rape is flashing before us daily. To sit and pity the survivors isn’t going to help, but settling in our hearts to fight this menace will. Here are some suggestions on what can be done to help #ENDRAPE.

We need to organize support groups where we can discuss the latest news and reports of violence meted out against young women and girls across Nigeria. We need women to be outspoken and air out their anger and frustration about women and girls being victims of sexual violence. The December gang-rape and murder of a young woman on a local bus in India sparked a massive outpouring of protests and demands from women’s rights groups across India. How many women in Nigeria are bold and ready to this? Women have an important role to play if we want to experience the implementation of plausible mechanisms against sexual violence. If these groups can travel round the country visiting numerous states to educate people about sexual violence in public, in the home and workplace, I am sure of success.

On the part of the country, we need more female police officers to help protect our girls and to also serve as the link between a rape survivor and justice. Our government needs to tighten laws against sexual violence and to mandate stricter punishments including, in some cases, the death penalty for rape.

Evidence have shown that the minimal rape cases reported to the police, to a large extent haven’t yielded results. If our so-called police force is not effective towards the protection of a Nigerian girl-child and still cannot help them get justice, what then is the function of their office? It is not enough to arrest traffic violators and standby to collect 20 naira from motorists, when prevailing issues such as this seeks attention. When the Nigerian police force does not uphold justice, other rape survivors see the necessity of speaking out. Victimization is a major factor that has helped enhance perpetrators to keep engaging in this immoral act. We need to change our mentality towards dealing with the rapists and not the survivors. It isn’t their fault that some men cannot control their sexual urges. It also isn’t their fault that they were born into a country where the justice system wasn’t built to protect them . But it will be our faults if we don’t stand up for this girls and say ‘enough is enough!’ There is a generalized sense of insecurity in public spaces, amenities, transport facilities in particular, and women are often victims of different forms of sexual harassment and assault.

We need to recognize that there is a serious problem in this country and men and women have to come together to get it done and stop the rape and assaults.

I rise because I know that men can #StopRape