Blogger’s Words –– Child Marriage in #Nigeria: Why It Must End

Blogger’s Words –– Child Marriage in #Nigeria: Why It Must End 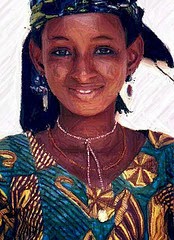 When I was 10, I saw a 13-year-old girl get married to a much older man in Zamfara State, Nigeria. I don’t remember her name, but her sad look will always be fresh in my mind. In most communities in Northern Nigeria, if a girl isn’t married at the age of 15, no one will want to marry her because she is considered too old and her parents are seen as irresponsible. In the village where I lived, it was seen as more productive to send young girls to sell goods on the street rather than to school. As a result, most girls in the region are uneducated and unable to earn a meaningful income. According to a Population Council report, in Northern Nigeria, 45 percent of girls are married by age 15 and 73 percent by age 18.

Child marriage is often seen as an alternative to poverty. Parents give their daughters in marriage for the bride price — it could be few cattle, a goat or maybe as little as 30,000 Naira (US $100). The issue of child marriage was brought to the international limelight recently, when Senator Sani Yerima –– who represents the mostly Muslim northwestern region of Nigeria –– proposed abolishing the minimum age for marriage of 18. Yerima, who himself married a 13-year-old Egyptian girl, argued in a recent interview on Al Jazeera English’s The Stream, that a girl is ready to get married once she hits puberty. Prior to the interview, he had proposed child marriage as a solution to child prostitution.

This proposal to abolish the minimum age for marriage is supported by some of Yerima’s Muslim constituents but the majority of Nigerians –– nearly all Christians and some Muslims –– oppose it and argue that religion should not be used as an excuse to perpetrate evil.

As a result of the debate, two stories from northern Nigeria have recently highlighted the health risks of child marriage. Aisha, a nine-year-old girl, was rushed to the hospital and she said that her husband did something “painful from behind.” Halima, a 13-year-old newlywed, almost died during childbirth. In Halima’s rural Hausas tribe, it is a tradition for women to deliver at home and crying during labor is a sign of weakness. On getting to the hospital after three days of painful labour, Halima lost her baby and developed an obstetric fistula due to the prolonged labor, leaving her incontinent. In some cases, the families of these girls cannot afford the surgery to treat a fistula. In addition, Nigeria as a country isn’t medically equipped to treat the large amount of girls affected.

Aisha and Halima’s stories are only unusual in the media attention they received. Growing up, I saw husbands of young brides return girls who developed fistula to their families and later marry another young girl, continuing the vicious cycle.

I am one of the lucky girls who wasn’t given away in marriage at an early age. Although I lived in northern Nigeria for almost a decade, my parents never believed child marriage was an option. Rather, they sent me and my two brothers to school despite the many costs, and gave me the freedom to choose when I wanted to get married.

I was fortunate not to have been married off at an early age. Every girl deserves that opportunity.

Every Form of Violence is About Power