It is appalling when it is being said that a full grown man rapes an innocent girl. What then can we say of a father who believes in some archaic tradition of sleeping with his daughters to prevent premature death. Yes, his very own blood! The shocking revelation is when his wife, the biological mother of these children, asked that he shouldn’t be prosecuted as this is a family matter! Mo gbe! Read the full story…

Yusuf Alabi, a 53-year-old man, who was paraded by the Kogi State Police Command for allegedly having carnal knowledge of his two daughters has confessed that he was only protecting them from premature death.

Parading the suspect, the Acting Police Commissioner, Austine Evbakhabokun said, Alabi was apprehended following a complaint by one of his sons, Abdulmalik, to the state investigation and intelligence bureau, alleging that his father was having sexual intercourse with two of his younger sisters.

The CP said when the boy challenged his father for committing the act, the suspect threatened to kill him if the news got to the public, cajoling the son that he was protecting his sisters.
Austine said the suspect has also confessed to the crime with an explanation that he committed the illicit acts in order to save his children from premature death. 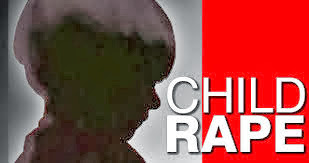 The suspect also made a shocking statement while being questioned by journalists that none of his daughters offered resistance anytime he approached them for sexual intercourse.
In a shocking twist, the wife of the suspect has called on the police not to prosecute her husband saying though he might have committed the crime but the issue is a ‘family matter’ and should be allowed to be settled in the family way.

As crazy as this seems, the only situation that baffles me is when a mother will stand behind her husband’s despicable act. I guess the love for a man sometimes can be above the love for a child (9 months!).