Awesome News! The Much Awaited Verdict for the December Gang-Rape of a Woman is Set to be Heard Tomorrow

Awesome News! The Much Awaited Verdict for the December Gang-Rape of a Woman is Set to be Heard Tomorrow 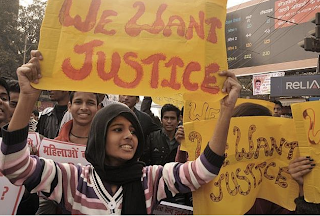 Nine months after the gang-rape and murder of a physiotherapy student that shook the national conscience, a fast track court is expected to pronounce it’s verdict on four of the accused tomorrow, Tuesday September 10. Additional Sessions Judge Yogesh Khanna is scheduled to deliver the verdict at 10.30 a.m. The court is likely to decide only whether the accused are guilty or innocent. If found guilty, the accused will either get life imprisonment or death sentence, depending on how the court interprets the culpability of each of the accused.

The police has charged six persons for the rape and murder on December 16, 2011. The case against one of the main accused, Ram Singh, was dropped following his mysterious death in Tihar Jail during the trial earlier this year. The six juvenile accused was held guilty by the Juvenile Board on August 31 and sent to a correctional home for three years.

The victim’s father told ‘The Hindu‘ on Monday “We hope that this court will take a better view of the case.”

My people, what better view is he talking about? He is asking that they be charged for a minor offence? They have to pay for their act. It’s time for these life-wrecking human beings to know that there are consequences for such acts. This story was gotten via The Hindu.

Help for Sexual Assault Survivors: Where to get started