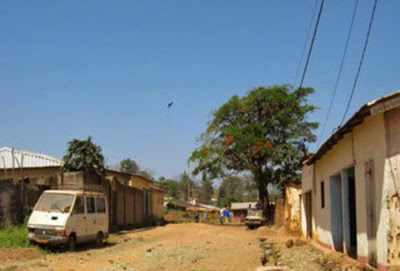 This is one crazy story. Come to think of it, are men delusional? This should enlighten you that rape is by tand no fault of the victim — indecent dressing. This is the story of a 55-year-old mother, who was raped by her own son.

It all started on the night of the 26th of October 2013 when Aboubacar Yerima, 27 raped his mother Amina Mbieng (55).

It is reported that Aboubacar who lives under the same roof with his mum was away from home for sometime. He was working as a labourer on a construction site in a small village called Yambaka which is situated 90km from Ngaoundere. After some days, he returned to Meiganga to see his mum.
Aboubacar arrived home at about 11 p.m. His mum got up immediately to fix something for her son to eat before he goes to bed. Sources say the mother had just a wrapper on. Aboubacar who was holding a bottle of beer,gave his mum to finish it up. She drank the beer. Some minutes later she fell asleep and was brutally raped by her own son
Amina Mbieng was rescued the next day at about 10 a.m. when her sister Mbieng Khadidja came to check on her. She immediately noticed something was wrong and called for help. Amina was transported to the hospital where it was declared that she had been drugged and raped.
Amina immediately reported to the Gendarme that she had been raped by her own son. She recounts what happened the night before and also begged them to take her son for spiritual help as locking him up will not solve the problem.
0 Likes