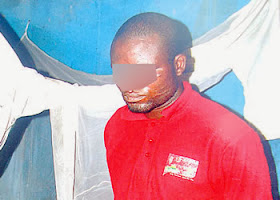 My people abeg, which kain punishment make we give this man biko? How wicked can a man be? How can one be so ruthless as to destroying one’s very own daughter! Really? Please read more and share your thoughts with us.

The Nigerian Tribune has reported that the Osun State Police Command has arrested a 35-year-old vulcaniser, Ademola Simiyu, of Ile Olode in Ikoyi for allegedly defiling his 11-year-old daughter.

Simiyu, a father of three, allegedly committed the act on Wednesday, October 23, when he woke up the girl at about 12 midnight while she was sleeping with her siblings and forcefully had carnal knowledge of her.
The suspect was said to have stifled the cries of his daughter by covering her mouth with his palm. The girl reportedly started bleeding heavily but the father refused to take her to the hospital, out of fear of questions that could be raised concerning the bleeding.

But his deeds came out in the open on October 24 when the girl reportedly told her mother what her father did to her during the former’s visit to the girl who had by then fallen sick.

Crime Reports gathered that when the case was reported to the police, detectives immediately took her to the hospital for medical examination and treatment.

When interrogated by the police, Simiyu was said to have confessed to the deeds, saying that he did not know what came over him. He also revealed that he married the girl’s mother in 2000 and they had three children between them but that they had lived apart in the last two years because of a misunderstanding they had, saying that he had been the one taking care of the children.

It was gathered that the medical report indicated that the girl had coital bleeding while vaginal examination revealed laceration in her vaginal wall, with foul smell and discharged altered blood coming from it. The report also indicated that her hymen had been torn and there was tenderness around her vulva and pelvis.

Confirming the incident, the state Police Public Relations Officer, Folasade Odoro, a Deputy Superintendent of Police said that the Commissioner of Police, Dorothy Gimba, had directed that a diligent investigation should be conducted into the case, decrying the high number of defilement and rape cases within the society.

Meanwhile, Crime Reports learnt that the suspect had been charged to Court 4, Osogbo Magistrates’ Court on a three-count charge. Though he pleaded not guilty to the charges, the magistrate ordered that he should be remanded in Ilesa prison. The case was adjourned to November 28.